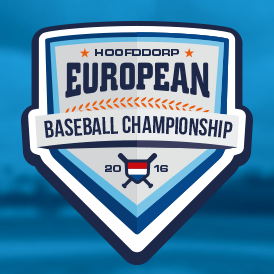 Croatia, the same teams that qualified for the 2014 European Championship. The Netherlands repeated as champions while Spain had their best finish in 61 years.

France struck first when 3B Maxime Lefevre doubled in CF Frédéric Hanvi in the first against Emil Sahlin. Sweden tied it in the 4th versus Leonel Cespedes when 2B Matt Merrifield grounded in 3B Joel Johnson. France took the lead for good in the 4th when LF Bastien Dagneau doubled, advanced on a wild pitch and scored on a sacrifice fly by SS Felix Brown. They tacked on two more in the 5th and led 7-2 entering the 9th. Pierrick Lemestre relieved Cespedes but had trouble closing it out. CF Pontus Byström hit into a two-base error by RF Norbert Jongerius. After two outs, PH Daniel Johnson singled and RF Johan Klarberg hit a two-run triple to make it 7-4. SS Nico Filice singled in Klarberg and Joel Johnson doubled for his third hit, putting the potential tying run in scoring position. Lemestre recovered to fan Merrifield to end it.

Diegomar Markwell had blanked the Azzurri for five innings, allowing only one hit. SS Erick Epifano singled and advanced on a botched pick-off attempt. 3B Alex Liddi singled to put men on the corners. Berry van Driel relieved. With one out, DH Jairo Ramos hit a RBI single to tie it. 2B Alessandro Vaglio's sacrifice fly scored Liddi, one of three runs for Liddi today. In the top of the 8th, Liddi doubled off Tom de Blok. Loek van Mil relieved and Ramos had a one-out RBI single. With two outs, CF Stefano Desimoni walked but RF Nick Nosti grounded out to leave Italy's lead at 3-1.

In the bottom of the 8th, Frailyn Florian relieved Da Silva but lasted one batter, walking DH Gianison Boekhoudt. Dudley Leonora pinch-ran. Carlos Teran relieved and hit Oduber with one out. With two away, 2B Dwayne Kemp doubled to cut the lead back to one. On a single by SS Stijn van der Meer, the ball hit Kemp, ending the inning. In the bottom of the 9th, the Netherlands were down to their last shot. De Caster had a one-out single then Teran plunked Smith. Nick Pugliese relieved and retired Leonora to move one out away but RF Kalian Sams greeted hit a game-tying single but Oduber whiffed to force extra innings.

In the top of the 10th, Kevin Kellij became the 5th pitcher for the Netherlands, with the two runners starting aboard under the Schiller Rule. On a double steal, an error by C Dashenko Ricardo scored one run. With one out, backup DH Alex Sambucci hit a sacrifice fly to put Italy ahead, 5-3. In the bottom of the 10th, PH Nick Urbanus singled off Pugliese. Kemp hit into a 5-4-3 double play, scoring Sams. Down to their last out for the second time, van der Meer singled in Oduber then stole second. Garia singled to bring in van der Meer with the winner.

The Dutch yanked starter Rob Cordemans after four shutout innings, turning to Lars Huijer. Huijer tossed three shutout innings but had some challenges. In the 6th, Spain had three hits and a walk but a double play erased one of the runners and Huijer retired 1B Jesús Ustariz to end the jam. In the 8th, former major leaguer Shairon Martis relieved Huijer. 2B Oscar Angulo and CF Engel Beltre both singled but Ricardo made a big play, picking off Angulo from second. Martis whiffed 3B Jesús Golindano. For the second day in a row, DH Fernando Martínez hit a multi-run homer in the 8th, drilling a two-run shot to right to tie it. Martis K'd Ustariz to end the inning.

Loek van Mil went 1-2-3 in the top of the 9th (needing 7 pitches) and Andrés Pérez had a similarly efficient bottom of the 9th (10 pitches). In the top of the 10th, SS Luis Guillorme bunted the starting runners over but van Mil struck out both Angulo and Beltre to keep the game even. In the bottom of the tenth, Pérez plunked Garia to load the bases. De Caster then singled to score Ricardo with the winning run.