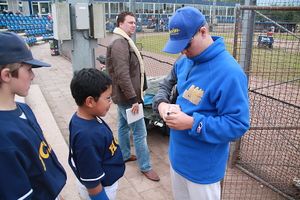 André Hughes is one of the top pitchers in Bundesliga, having led his division in wins three years in a row (2005-2007).

In 2007, the young southpaw was 11-1 with a 1.47 ERA. He led in wins, was second in WHIP (0.97) and second in ERA, again trailing Márquez. He was 0-2 with a 4.05 ERA in the 2007 European Cup. In the 2007 European Championship, André struggled for a 6-2 German team, with a 6.35 ERA and no-decisions against both Croatia and Great Britain. Hughes was the worst German hurler in the 2007 Baseball World Cup, with a 43.20 ERA. He allowed 8 runs on 8 hits in 1 2/3 IP. He got the start against the Dutch national team (which finished 4th) but obviously struggled from the get-go. He walked leadoff hitter Roger Bernadina and allowed a single to Hainley Statia before getting Raily Legito to hit into a double play. Sharnol Adriana singled in one run and Vince Rooi singled. After facing five straight players with minor league experience, Hughes served up a 3-run homer to Dirk van 't Klooster. Tjerk Smeets also homered. Bryan Engelhardt singled before Hughes struck out #9 hitter Roel Koolen. In the second inning, Bernadina walked and Hughes threw a wild pitch. Statia was retired but Legito singled. Adriana hit a sacrifice fly to make it 6-3. Rooi then doubled. Both inherited runners would come around to score as Hughes' ERA kept on rising.

Hughes was serving in the German army as of 2008. In the 2008 Final Olympic Qualification Tournament, he was 0-1 with a 1.80 ERA, walking 2 in 15 innings while striking out 10. He tied Chien-Ming Chiang and Paul Mildren for third in strikeouts, trailing Francisco Campos and Min-han Son. He tied Walter Silva for 9th in ERA. This was even more impressive since his two outings were against teams that qualified for the 2008 Olympics. He threw six shutout innings against the host Taiwan national team before Chih-Sheng Lin and Kuo-Hui Lo doubled in the 8th and Chih-Kang Kao singled in Luo. He lost to Chih-Chia Chang due to poor offensive support. Despite not going over 77 mph on the radar gun against Canada, Hughes allowed one run and fanned 7 in 8 1/3 innings in a pitching duel with Brooks McNiven. A David Corrente homer was all the offense he allowed. Canada loaded the bases with one out in the 9th of the 1-1 game but Dirk Fries relieved and put out the fire.

Hughes signed with Mr. Cocker HCAW in the Netherlands for 2009, the first German to play in Hoofdklasse since Simon Guhring in 2004. He debuted on Opening Day, getting the start against RCH. He fanned 8 and allowed only one run (unearned) in 6 2/3 innings, getting the win.