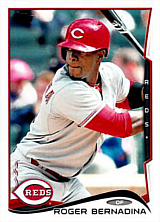 Roger Bernadina made his major league debut with the Washington Nationals, in his 8th professional season, in 2008. After six years in rookie and A ball, he made it to both AA and AAA in his 7th season. He is the brother of Ludwig Bernadina and minor leaguer Roderick Bernadina.

In the 2007 European Championship, Bernadina hit .632/.759/1.053 with 18 runs scored and six steals in six tries. In the Gold Medal game, he scored 3 times to help the Dutch clinch a spot in the 2008 Olympics. He had the best OBP in the finals and was second in average and slugging to MVP Brant Ust. Bernadina led in runs scored and tied for the stolen base lead in the finals and made the EC All-Star team in the outfield. Bernadina remained a spark plug for the Dutch team in the 2007 Baseball World Cup, hitting .357/.500/.429 but was limited to four games in the field due to injury problems; Martijn Meeuwis and Gregory Halman filled in as Bernadina was used for pinch-hitting. The Dutch Baseball and Softball Association awarded Bernadina the Guus van der Heijden Memorial Trophy as the best international player under 23 years old for 2007. Roger began 2008 back with the Senators and hit .323/.398/.474 with 26 steals in 35 tries in 73 games. He was 6th in the Eastern League in average, 9th in OBP, tops in steals, tied with Nick Evans for 2nd in triples (7) and tied for 6th in runs scored (47).

Roger made his major league debut after being promoted to the Nationals due to the injury to Lastings Milledge in 2008. He led off and played center in his debut and went 1 for 5 and scored a run. In his first at-bat, he singled off Jeremy Guthrie and later came home on an Aaron Boone grounder. Bernadina was the former 6th Hoofdklasse player to make the majors, following Win Remmerswaal, Rikkert Faneyte, Robert Eenhoorn, Ralph Milliard and Rick Vanden Hurk. He earned the nickname "The Shark" for his ability to gobble down fly balls in the outfield, reminiscent of a shark pouncing on smaller fishes. Wanting to take advantage of a rare cool nickname, the minor league Potomac Nationals decided to honor him with a special promotion in 2013, minting a collectible figurine that depicted Roger as a half-man, half-shark hybrid, bounding out of the water to snatch a fly ball.

His long world tour brought him back to the Netherlands in 2020, 14 years after his last time in the Hoofdklasse. He starred for the Dutch team in the 2021 European Championship, getting atonement for his having quit the team during their 2016 European Championship title run (he had quit after being benched for missing a practice). In the 2021 Euros, he hit .375/.633/.750 with 13 runs, 7 RBI, 9 walks and 6 steals (never caught) in 6 games, handling ten chances error-free. He led the Euros in runs (one ahead of Edison Valerio), tied for 8th with 3 doubles, was 2nd to Valerio in OBP, was 5th in OPS (between Dashenko Ricardo and Matěj Hejma), led in walks (one ahead of Denys Brechko, Shawn Larry and Noel Gonzalez), tied Dimitri Kourtis for 2nd in times plunked (4, one behind Ray-Patrick Didder) and was second in steals (one behind Didder). In the Gold Medal Game, he came up with the Netherlands down 4-1 in the 7th against Israel and two aboard. He drilled a three-run shot off Charles Rossman to tie it; the Netherlands rallied to win the game for their fourth straight European title. Bernadina was named European Championship MVP, the second former major leaguer to win the award, 16 years after Ivanon Coffie was the first (Faneyte had won prior to his stint in The Show). He was the second straight Willemstad native to win, following Ademar Rifaela (two other Willemstad natives, Curt Smith and Coffie, had also claimed the award in the 21st Century).