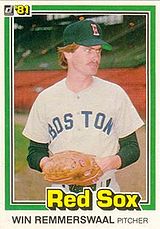 A pitcher with a very apt first name, Win Remmerswaal pitched 22 games in the majors, going 3-1. He was only the 4th Dutch-born players and the first player born and raised there to make the majors. Others have followed at a pace of one or two per decade since Remmerswaal opened the gate - Rikkert Faneyte and Robert Eenhoorn in the 1990s and Rick Vanden Hurk and Greg Halman in the 2000s.

He started playing baseball in Wassenaar, a little town next to The Hague. He also had three brothers who could play baseball very well (Hans Remmerswaal and Jerry Remmerswaal reached the top Dutch league), but they all died at young ages. In 1972, he finished second to Hamilton Richardson in the MVP voting. He threw a no-hitter against ADO in 1973. Remmerswaal was the first player to go from Hoofdklasse to the major leagues; it would be 14 years before Faneyte became the second.

Remmerswaal was a key performer for the Dutch national team in the 1973 European Championship, winning best pitcher honors in the tournament. He threw 6 2/3 shutout innings against the Italian national team for the victory in a come-from-behind 7-6 win that helped the Netherlands win Gold.

Remmerswaal had a live arm - he received a compliment from Reggie Jackson - but shoulder problems ended his U.S. career. He is best remembered in the States for his often amusing eccentricities. He continued to play in Italy in the mid-1980s.

Remmerswaal was head coach of the 1989 Amsterdam Pirates. He got pneumonia and pleurisy in 1997 and wound up in a coma for a period. He never fully recovered and lived in a Dutch nursing home from that point up until his death in 2022 at the age of 68.