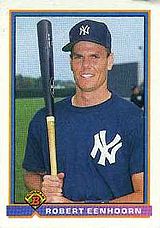 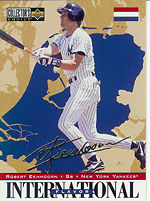 Sir Robert Eenhoorn had a brief major league career spread out over four seasons, but was a productive player in the minors and has been a big factor in Dutch baseball for many years. As a player, he appeared in the Olympics twice. He later managed the Dutch national team in both the Olympics and the World Baseball Classic. Eenhoorn won both MVP and Coach of the Year honors in the Dutch Hoofdklasse. He later was the Technical Director for the Dutch national team, performing that role so well that it won him a knighthood in his homeland. He is a member of the Dutch Baseball Hall of Fame.

Eenhoorn's father played baseball during World War II as an act of Dutch rebellion against the German occupation. Robert played soccer and baseball growing up and credited his soccer play with helping his footwork on the diamond. [1]

Professional baseball career in the US[edit]

Eenhoorn was named the third-team All-American shortstop by Baseball America in 1990 while attending Davidson College in North Carolina. [5] From 1949-2011, he is the only major league player to come out of Davidson. [6]The New York Yankees made him a second-round draft pick in 1990, one round after they took Carl Everett. The pick was compensation for the loss of free agent Walt Terrell to the Pittsburgh Pirates. He was the 45th overall pick, between Bob Wickman and Darrell Whitmore. The scout was Jeff Taylor.

Eenhoorn began his professional career with the pennant-winning Oneonta Yankees in the New York-Penn League and hit .268/.324/.355. He stole 11 bases in 15 tries. He was voted to the League All-Star team as a utility infielder and was labeled a "defensive genius" by Baseball America. He led the league's shortstops in fielding percentage (.960). According to Baseball America, he was the top prospect in a league that produced Carlos Delgado (rated #4), Jeromy Burnitz (#10) and Brian Giles (unranked). [7]

In 1994, Robert batted .239/.270/.324 for the Columbus Clippers. He went 2 for 4 in his first cup of coffee with the Yankees in 1994. In his big league debut, he pinch-hit for Pat Kelly with a 11-1 lead in the 6th. He was retired by Bobby Thigpen. Staying in the game at shortstop, with Mike Gallego moving to second base to replace Kelly, he turned a double play with Gallego and Don Mattingly in the bottom of the inning. He came up again and doubled off Goose Gossage to open the 9th and came home on a hit by Randy Velarde. [10]

Robert was on the Netherlands Gold Medal team in the 1999 European Championships. His 11-year hiatus from international competition was due to the fact that professional players were not allowed to play until 1997; after his amateur career ended in 1989, he had thus been sidelined. In that European Championship, he batted .200/.304/.200 only and made three errors in five games at shortstop; the Dutch won Gold despite his struggles. He hit .316/.366/.368 in the 1999 World Port Tournament. He had four errors in nine games but split WPT MVP honors with double play mate Ken Brauckmiller as they turned 10 double plays during the tournament. [13] The Netherlands beat a Cuban B-squad led by stars Osmani Urrutia and Joan Carlos Pedroso, 2 games to 1, in the finals. In game 3, Eenhoorn drove in two of the three Dutch runs. [14] In the 1999 Intercontinental Cup, Eenhoorn hit a miserable .087/.125/.087 for the Netherlands. [15] During the regular season, he was player-head coach (the Dutch equivalent of manager) and his Neptunus team won the 1999 Holland Series. [16] He led the 1999 Hoofdklasse with 19 doubles and hit 16 homers to tie Elston Hansen and Raymond Hofer for the lead. [17]

He hit .335 with 35 RBI in the regular season and managed Neptunus to the 2000 Holland Series title. He was among the league leaders in average (9th, between Gino Henson and Faneyte), runs (38, tied for second with Raily Legito behind Hansen), hits (51, 7th), doubles (a league-best 16), home runs (3, tied for 8th), RBI (3rd behind Remy Maduro and Mike Crouwel) and slugging (4th behind Maduro, Crouwel and Marcel Kruyt). [18] He was named Hoofdklasse MVP as well as Coach of the Year, the first person to take both honors in the same year. [19]

In the 2000 Haarlem Baseball Week, he was 4 for 21 with two doubles, a walk and an error. [20] Eenhoorn played for the Netherlands at the 2000 Sydney Olympics. He was not productive in those Olympics, going 3 for 26 with one walk, no runs and no RBI. He was caught stealing in both of his attempts. Defensively, he had 3 errors in six games, fielding .929. Only Evert-Jan 't Hoen hit worst among the Dutch regulars. He was 0 for 3 in the historic Dutch win over Silver Medal-winning Cuba. [21] He retired as a player at season's end. Overall, he had hit .347 with 26 HR in 252 games in the Netherlands. [22] His number 16 was later retired by Neptunus. [23]

He guided Neptunus to a third straight title in 2001 and again was Coach of the Year. He became the second head coach to guide his team to three straight titles; Jan-Dick Leurs had won four. [24] He was the first coach to win titles his first three years; the next (and the one who topped his record, with 4) would be another infielder with US experience, 't Hoen. [25]

Eenhoorn then set up the first baseball academy in Europe, the Unicorns academy (Eenhorn is Dutch for unicorn). The baseball academy model has been duplicated in other European countries and has led to a significant increase in the number of European players signing with MLB clubs. [26] Eenhorn said "I had to close a big gap when I arrived in America. I had to figure it out on my own; I had nobody to ask what it would be like. Boys these days do have that. The gap between Europe and a professional career is smaller." [27] 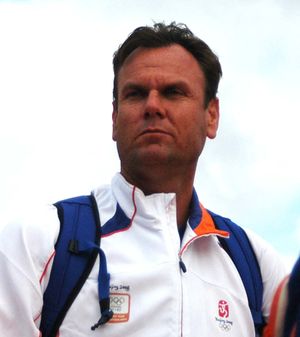 Eenhoorn shown just after the Beijing Olympics in 2008

He managed the Netherlands to a Gold Medal at the 2001 European Championships, a seventh-place finish in the 2001 Baseball World Cup and tied for 8th at the 2003 Baseball World Cup. He missed the 2003 European Championship due to a family tragedy; Davey Johnson took his place. [28] He was the manager of the 2004 Dutch Olympic team that finished sixth at the Athens Games. His coaches included Davey Johnson and Hensley Meulens. He guided the Netherlands to a 4th-place finish in the 2005 Baseball World Cup, the highest Dutch finish ever to that point. [29] He then led the Dutch to the Gold in the 2005 European Championship. He managed the Netherlands in the 2006 World Baseball Classic; he selected 18-year-old starting pitcher Shairon Martis against Panama and the move paid off as Martis threw the first no-hitter in World Baseball Classic History.

Following the 2008 Olympics, Eenhorn transitioned into the role of technical director (the equivalent of Dutch national team general manager) for the Royal Netherlands Baseball and Softball Federation and Rod Delmonico replaced him as manager of the Dutch national team. [33]

On November 11, 2011, he was knighted on the order of Queen Beatrix, after he led the Dutch team to the 2011 Baseball World Cup title in his role as technical director, assembling the winning squad. It was the first global baseball tournament won by the Netherlands, as they beat Cuba twice as well as the US and other powers, in a performance that confirmed the country's progression in international baseball ranks over the preceding decade. Also knighted were manager Brian Farley and catcher Sidney de Jong. [34] [35]

Among Eenhoorn's future goals are having MLB regular season games played in Europe and MLB funding for Dutch baseball. [36] In 2014, Eenhorn left the Royal Netherlands Baseball and Softball Federation to become general director of the soccer team AZ Alkmaar. [37] In 2016, he became one of the two commissioners of the top soccer league in the Netherlands. [38] Two years later, he was inducted into the Dutch Baseball and Softball Hall of Fame. [39]