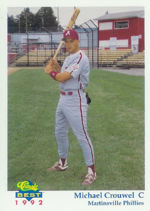 Mike Crouwel was a two-time Hoofdklasse MVP and three-time home run leader. He played briefly in the US minors. He also appeared several times for the Dutch national team, most notably in the Olympics. He is the son of Wim Crouwel, who had also been a baseball star in the Netherlands.

Crouwel led the 1991 Hoofdklasse with 47 RBI and tied Scott Khoury for the home run lead with 16. He was with the Netherlands in the 1991 European Championship. Crouwel's international career was put on hold as he turned pro and professional players were not allowed in international tournaments in 1998.

Back with Haarlem Nicols for 1993, Crouwel led the league with 16 home runs. In 1995, he led in RBI (41), now with Kinheim. He won MVP honors in 1996 with Kinheim. Mike led the 1997 Hoofdklasse with 76 hits for Kinheim, falling two shy of the record. He was again MVP that year. He was back with the Netherlands national squad for the 1999 European Championship, going 6 for 24 with a walk, double and home run as the Dutch left fielder.

Crouwel had perhaps his best year in 2000, with the Amsterdam Expos. He led the Hoofdklasse in average (.432, .042 ahead of the runner-up), hits (64, 4 ahead of Johnny Balentina) and homers (7, tied with Remy Maduro, setting a wooden-bat era record). He was second in RBI (42, 3 behind Maduro) and slugging (.628, .012 behind Maduro and .084 ahead of anyone else). Former major leaguer Robert Eenhoorn beat him out for MVP honors. He had one at-bat in the 2000 Olympics. Down 9-2 in the 8th against the Japanese national team and with Ralph Milliard on first, Crouwel pinch-hit for DH Sharnol Adriana. Facing Yoshikazu Doi, he ground into a double play. Overall, Crouwel played 56 games for the Dutch national team.

Mike led the 2001 Hoofdklasse with 46 RBI, 7 ahead of runner-up Percy Isenia. Overall, Crouwel had played 565 games in his Hoofdklasse career.

After retiring as a player, Crouwel became a coach. He was the assistant coach of the 2004 Amsterdam Pirates, third base coach for Amsterdam in 2005 and third base coach for ADO in 2006. He was head coach of Kinheim in 2016, going 24-17 but the team collapsed after the year when all its players left and they were unable to proceed for 2017. He was head coach of Kinheim again in 2020, going 12-18.