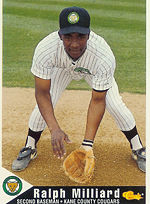 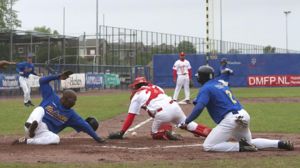 Milliard was the 4th player raised in the Netherlands to make it to the majors, following Win Remmerswaal, Rikkert Faneyte and Robert Eenhoorn and was the second major leaguer born in Curacao, following Hensley Meulens.

He played for The Netherlands at the 2000 Sydney Olympics. He was also on the Dutch national team in the 2001 Baseball World Cup, hitting .364/.488/.424 with 7 runs in 10 games. He stole 8 bases, tying Trent Durrington for the lead in the Cup. In the 2001 World Port Tournament, he hit .303/~.425/.394 for the Silver Medalist Dutch team. He batted .200/.344/.240 in the 2001 European Championship and the Netherlands won the title; he stole 4 bases in 4 tries. He tied Michal Müller and Tomáš Ovesný for the most swipes in the event. In 2005, he was suspended by Hoofdklasse for 8 months after he was found positive for a banned substance. He said it was a medication he took for a sore shoulder.

Milliard retired as a player at the end of the 2008 season and was hired as an assistant coach for HCAW's reserve team, which plays in Eerste Klasse. He became assistant coach for Kinheim in 2011 and remained in that role for most of 2012. After one round of the 2012 postseason, though, he and head coach Eelco Jansen were both let go. He became head coach of HCAW for 2015 and went 10-30 in his one year in that role.

His brother Allan Milliard has played in the Hoofdklasse.