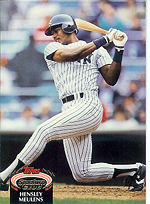 Nicknamed "Bam-Bam", Sir Hensley Meulens was the first major leaguer from Curaçao. A top New York Yankees, prospect in the late 1980s, he never lived up to his potential but still played seven seasons in the bigs and several more in Japan. He later became the San Francisco Giants hitting coach.

Originally a third baseman, Meulens was signed by the Yankees in 1985 and made his pro debut the following summer with the GCL Yankees. With the Prince William Yankees in 1987, he hit .300 with 28 home runs and was named Carolina League Player of the Year by Baseball America. After splitting 1989 between the Albany-Colonie Yankees and the Columbus Clippers, he earned a late-season call up to New York. He made his big league debut on August 23rd, starting at third against the Boston Red Sox, going 1-for-3 with a run scored and his first major league hit coming off Mike Boddicker. Overall, in 8 games for the Bronx Bombers that year, he hit .179. 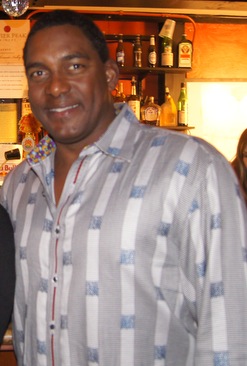 Moved to the outfield in 1990, Meulens was back with the Clippers, hitting .285 with 26 home runs and 96 RBIs, and was named International League MVP. He was then with New York again in September, hitting .241 in 23 games with his first big league homer coming off Charlie Hough of the Texas Rangers on September 12th. He was with the Yankees for the full 1991 campaign and hit .222 with 6 home runs as the team's fifth outfielder. However, he was back at AAA Columbus for the majority of 1992. Despite an excellent season, hitting .275 while leading the IL with 26 homers, 100 RBI, and 96 runs scored, he only appeared in 2 big league games in late September, going 3-for-5 with a home run. After splitting 1993 between Columbus and New York, he was released.

Meulens went to Japan in 1994, playing for the Chiba Lotte Marines. He then spent the next two years with the Yakult Swallows. In his three seasons there, he hit in the .240's each year with 23 to 29 home runs.

Returning to the U.S., Meulens signed with the Atlanta Braves in late 1996 but was released during Spring Training. He then caught on with the Montreal Expos, spending most of the 1997 season with the Ottawa Lynx, hitting .274 with 24 homers for the club. He was back in the majors for a September call-up with the Expos and hit .292 with a pair of home runs in 16 late-season games. After being let go by Montreal that offseason, he soon signed with the expansion Arizona Diamondbacks. He spent most of 1998 with the Tucson Sidewinders, going 1-for-15 in a brief cup of coffee in the majors, before ending the year in the Chicago White Sox chain (for just 2 games).

Hanging up his spikes, Meulens was a coach for the Bluefield Orioles in 2003 and 2004 and also a member of the Dutch team's coaching staff at the 2003 European Championship, 2003 Baseball World Cup and the 2004 Olympics. After serving as hitting coach of the Indianapolis Indians from 2005 to 2008, he was a member of the Dutch staff at the 2009 World Baseball Classic and was the hitting coach of the Fresno Grizzlies that year as well. He was named hitting coach of the San Francisco Giants before the 2010 season. He was knighted by the Netherlands in 2012 and was named manager of the Dutch team for the 2013 World Baseball Classic, guiding them to the final four for the first time. He was promoted to bench coach for the Giants in 2018, a sign that he was possibly being groomed to eventually succeed Bruce Bochy as manager. That fall, he was one of the candidates interviewed for the managerial opening with the New York Yankees following the surprise firing of Joe Girardi. In 2020, he was named bench coach of the New York Mets after Gabe Kapler was named to succeed Bochy, and not him. He stayed for only one season. In 2022, he was hired by the Yankees to be their assistant hitting coach, replacing Eric Chavez who had been poached by the Mets a few weeks earlier.

Meulens is fluent in five languages: his first language was Spanish, and he also learned Papiamento, Dutch, and English as a child. He also learned Japanese while playing in Nippon Pro Baseball.

Away from baseball, Meulens was scheduled to go into outer space as an "astronaut" for "Space Expedition Curacao," a commercial space tourism program that his home country planned to launch in 2014.

In 2016, he was inducted into the International League Hall of Fame, noted for his 1990 MVP season and 1992 home run title in that circuit. His nephew Shadrach Meulens made his Hoofdklasse debut that year.