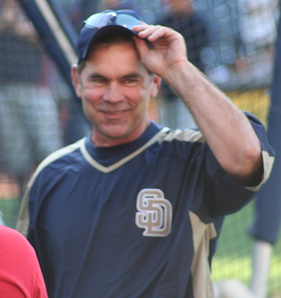 Bruce Bochy played nine years in the majors, and then managed for much longer - in 2019, he managed his 25th and final season and reached 2,000 victories as a manager. In all those years as a manager, he was with only two teams - he won a pennant with the San Diego Padres in 1998 and he won three World Series with the San Francisco Giants.

Never a regular in the majors, Bochy was a catcher for three teams during his career. He started off with the Houston Astros in 1978 and went to the World Series with the Padres in 1984. After concluding his major league career, he was a player/coach for the Las Vegas Stars in 1988 before beginning his managing career the following season. In 1989, he played for the Orlando Juice of the Senior Professional Baseball Association and hit .216 in 31 games with the team.

Bochy was a Padres coach in 1993 and 1994 and was the club's manager for a dozen years, starting in 1995. As Padres manager, he won more than twice as many games as any other manager in team history and led the team to the World Series in 1998, where they were swept by the New York Yankees. He was part of a controversy in 1998 when he had Manny Aybar remove a cap with the numbers "123" inscribed in memory of Jose Oliva; Aybar's manager Tony LaRussa got back by invoking a little-enforced rule when Bochy's third base coach Tim Flannery was outside the coach's box. After the 2006 season, he became skipper of the San Francisco Giants.

When Bochy recorded his 1,035th win as a manager, he passed Felipe Alou for most wins by a manager born outside of the United States; Bochy had previously replaced Alou as manager of the Giants. In 2010, he led the Giants to their first World Series title in San Francisco, defeating the Texas Rangers 4 games to 1 in the World Series. The Giants got hot late in the season after trailing San Diego most of the year in the NL West; they caught and passed them in September, then defeated the Atlanta Braves in the NLDS and the Philadelphia Phillies in the NLCS. The Giants were again World Series champions in 2012, when they swept the Detroit Tigers in the Fall Classic. Their hard slogging was in the two earlier rounds of the postseason: in the NLDS, they lost the first two games at home to the Cincinnati Reds before mounting a remarkable comeback, then they trailed 3 games to 1 in the NLCS before coming back to defeat the St. Louis Cardinals. Bochy made it three World Series wins in five years when the Giants won again in 2014, defeating the Kansas City Royals in seven games in the Series.

After Bochy's star catcher Buster Posey suffered a serious injury in a collision at home plate in 2011, Bochy became a strong proponent in a campaign to ban such collisions. The campaign succeeded when owners approved the principle of a rule at the 2013 Winter Meetings. 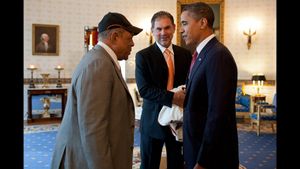 Bochy meets with Willie Mays and Pres. Obama at the White House, July 2011

Just before the opening of spring training in 2015, Bruce underwent a procedure to have stents inserted in arteries leading to his heart in order to reliever heart trouble. The operation was a success and he was able to join his team after a few days of rest while bench coach Ron Wotus directed the first couple of days of workouts. In 2016, Bochy joined Sparky Anderson as the only two managers to ever win 800 games with two different teams. He kept up the Giants' run of success in even-numbered years when they qualified for the Wild Card Game that year, in spite of slumping badly during the second half. They upset the New York Mets in the game, thanks to a great performance by Madison Bumgarner, and gave the Chicago Cubs a run for their money in the Division Series before bowing out. It was a last hurrah, as the Giants sank like a rock in the standings in 2017, falling to last place in the NL West, and then having another poor season in 2018.

Heading into spring training in 2019, Bochy announced that he was starting his final season and would retire at the end of the year. Upon hearing the announcement, pitcher Jeff Samardzija paid him a big compliment, saying that most managers are "puppets" who just know how to spout cliché, whereas Bochy is a real human being, who listens to players and knows how to motivate them. No one expected the Giants to be competitive that season, as a major rebuild was needed while there were still no young potential stars on the roster. Early returns confirmed that fans were in for another long season. One of the few highlights of the early parts of the season came on June 4th, when Bochy won his 1,000th game as the team's manager with a 9-3 win over the Mets. In the Giants' long history, only he and John McGraw had reached the mark. The Giants played better in the second half and on September 18th, Bochy recorded the 2,000th win of his managerial career, 11-3, over the Boston Red Sox.

Bruce's brother, catcher Joe Bochy, played several seasons in the Minnesota Twins organization, and his son, Greg Bochy, played three years in the Padres farm system. Another son, Brett Bochy, made his debut with the Giants in September of 2014, making Bruce the 7th major league skipper to manage his son.

He has written a book about the power of walking as a means of relaxation and stress relief.

With a hat size measurement of 8 1/8, Bochy had one of the largest heads in major league history. While playing for the New York Mets in 1982, the team did not have a helmet that fit his head and had to send to Triple A for one that would fit him.