Note: This is the page for Hall of Fame Manager and third baseman John J. McGraw. For the Federal League pitcher, click here. 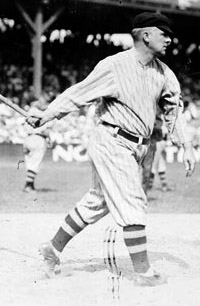 "There has been only one manager, and his name is John McGraw." - Connie Mack, quoted at the Hall of Fame website

John McGraw was a Hall of Fame manager who also had a tremendous playing career.

He broke in with the Baltimore Orioles of the American Association (which was a major league at the time) in 1891. As an 18-year-old rookie, he hit .270, in a league where the league average was .255. During his career, he appeared in 782 games as a third baseman, 183 as a shortstop, and smaller numbers as an outfielder and second baseman. Players of the time were often small and wiry, and McGraw was no exception - he was only 5 ft. 7 in.

He also drew a great number of walks. When he hit .391, he also had 124 walks to achieve an unbelievable OBP of .547. He led the league three times in OBP during his career.

In 1899, McGraw became a player-manager, and after that he was to focus increasingly on managing. Except for 1900, when he was a player but not a manager with the St. Louis Cardinals after the Orioles were excluded from the National League, he was a player/manager for each year through his last as a player in 1906.

He joined the American League's newly-recreated Baltimore Orioles in 1901, the league's first year as a direct competitor to the National League. He hit .349 and the following year, he moved in mid-season to the New York Giants, taking a number of his best players with him, and spent a number of years there, playing occasionally but primarily serving as manager.

As a player, he achieved a lifetime average of .333 and a lifetime OBP of .466. The batting average puts him #25 of all time, while the OBP puts him #3 of all time. His career OPS+ was 135, however, his career was relatively short - although he appeared as a player in 16 seasons, he played 100 games or more in only 5 of them. He had less than 5,000 plate appearances - granted that there were fewer games played in a season in those years.

In terms of "similarity scores", no player is really very similar, but some of the players in the top ten are Hughie Jennings, Frank Chance, and Red Rolfe. However, as sometimes happens with similarity scores, the most similar players don't seem to be as good as McGraw was.

His candidacy for the Hall of Fame didn't have to rest alone on his playing days, however, because he went on to have a managerial career of 33 years, with a winning percentage of .586. He managed the Orioles the first 3 years, but then spent the rest of his career with the New York Giants.

While people these days tend to remember the Yankees of the 1920s better than the Giants, the Giants were a mighty force during most of McGraw's tenure as manager. They won the pennant 10 times and the World Series 3 times. During much of that time, he was fortunate to have Christy Mathewson on the team. He also managed "Iron Man" Joe McGinnity, Roger Bresnahan, Bill Dahlen, Jim Thorpe, Mike Donlin, Larry Doyle, Fred Merkle (McGraw was the manager on the day of the famous "Merkle Bonehead Play" that involved so many famous players on both the Giants and the Cubs in 1908), Art Devlin, Art Fletcher, Rube Marquard, George J. Burns, Hal Chase, Ross Youngs, George Kelly, Dave Bancroft, Frankie Frisch, Hack Wilson, Heinie Groh, Casey Stengel, Travis Jackson, Bill Terry, Freddie Lindstrom, Rogers Hornsby, Edd Roush, Burleigh Grimes, Mel Ott, Lefty O'Doul, Carl Hubbell, and Carl Mays.

It is also known that he helped arrange for former players Amos Rusie and Dan Brouthers to serve as night watchmen at the Polo Grounds, and in the evening after games the three would sometimes sit and reminisce about old times.

According to Frank Deford in The old ball game : how John McGraw, Christy Mathewson, and the New York Giants created modern baseball, New York : Atlantic Monthly Press, c2005, McGraw's teammates took up a collection and presented him with the complete works of Shakespeare on his retirement as manager.

At one point, he was head coach of St. Bonaventure University. For a number of years he ran at least one billiard parlor in New York City.

He died in 1934 and was elected to the Baseball Hall of Fame on December 7, 1937 by the Centennial Commission.

John McGraw holds the major league record for losses (28) by a manager in World Series play. He was nicknamed " Little Napoleon" for his managerial style and small stature.

McGraw held the career ejection record of 131 until it was broken by Bobby Cox in 2007, 73 years after McGraw's death.

"McGraw men were brought up to hustle. He kept you liking the game. If he couldn't, he'd get rid of you so quick you wouldn't have time to notify the post office of your change of address." - Casey Stengel 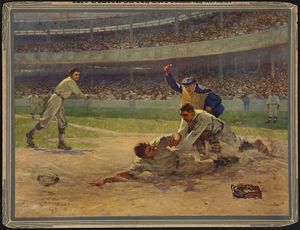