Carl Mays was one of the better pitchers of the 1910s and 1920s in the American League, but his reputation has been forever tainted by one incident: he is the only major league pitcher who ever killed a batter with a pitch. The unfortunate victim was Cleveland Indians shortstop Ray Chapman, who was hit in the left temple on August 16, 1920 and died the following morning. Because Mays already had a reputation as a head-hunter and a generally unfriendly man at the time, many blamed him for what he always claimed was an accident.

Born in Liberty, KY in 1891, Mays grew up in Mansfield, MO, the son of a traveling methodist minister. His father died when he was 12, and he moved again to Kingfisher, OK, where a cousin taught him to play baseball. He developed a unique submarine delivery which had him often scrape his knuckles against the mound when pitching. He could release the ball at a variety of angles, making it very hard for opposite batters to pick up the ball. His pitches had a very heavy sinking effect that one opposite batter, Hod Ford, compared to "hitting a chuck of lead; It would go clunk and you'd beat it into the ground". This would induce an incredible amount of ground balls, and he set Boston team records for assists by a pitcher from 1916 to 1918, recording over 117 each season. Yet, for having a style that made him keep the ball down, he would always hit a fair share of opposing batters, as he never wanted to surrender the inside of the plate to them. Coupled with a surly demeanor, "like a man with a permanent toothache" and a tendency to berate his fielders when they made errors, he was one of the least-liked men in baseball during his prime.

He began his professional career for Boise of the Western Tri-State League in 1912, where he went 22-9 with a 2.09 ERA, leading the league in victories. After one year with Portland of the Northwestern League, he moved east to the International League's Providence Grays in 1914. There he was the ace of a pennant-winning staff with 24 victories (most in the IL; his .750 winning percentage also) and was joined towards the end of the year by a young Babe Ruth, who had been sent down by the Boston Red Sox to get more regular work. Both pitchers were called up to Boston at the end of the year, but Mays did not appear in a game. Mays hit .277 for Providence, more than Ruth hit in the IL that year. Carl also slugged .429 for the club.

Carl Mays made the Red Sox pitching staff at the start of the 1915 season, making his Major League debut on April 15. He was used in 38 games, most of them in relief, going 6-5 with a 2.50 ERA and a league-leading 7 saves (figured retroactively, as the statistic had not yet been invented). The Red Sox won the pennant and faced the Philadelphia Phillies in the World Series, but Mays was not used in his team's 4-1 triumph. 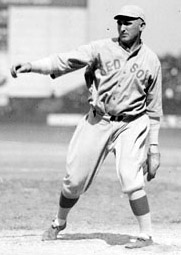 Mays is remembered for an incident during his rookie season in which he was naive and ignorant enough to pick a fight with Ty Cobb. In one game, he threw high and inside to Cobb, and the latter replied by laying a bunt down the first base line, where Cobb plowed into him and spiked his leg. After that, the two hard men held a grudging respect for the other's no-holds-barred sense of competitiveness.

In 1916, Mays won 18 games with a 2.39 ERA as he split his time between the bullpen and the starting rotation. He saved Game 1 of the World Series against Brooklyn, bailing out Ernie Shore with two outs in the ninth inning, but was the losing pitcher in Game 3, being outpitched by Jack Coombs in Boston's sole loss of the Series. He continued to improve in 1917, posting a 1.74 ERA - the third lowest in the Major Leagues. He hit a league-leading 14 batters that year, earning the reputation as a head-hunter that would plague him the rest of his career. He won 22 games that year, then came back with a record of 21-13 in the war-shortened 1918 season when the Red Sox won their last pennant until World War II. He was the winning pitcher of two games of the World Series for the Red Sox, pitching complete games in identical 2-1 victories in Game 3 and Game 6.

Things went downhill quickly for Carl Mays in 1919. Boston was no longer dominant on the field, and the offense would no longer provide him with adequate run support. He went on a losing streak in spite of pitching well, seeing his record fall to 5-11, then on July 13, he was hit in the head by a throw from catcher Wally Schang who was trying to cut down Chicago baserunner Eddie Collins trying to steal second base. Mays stormed off the mound at the end of the inning and returned to Boston, claiming he would no longer pitch for the team. After a two-week strike, the Red Sox worked out a deal that sent Mays to the New York Yankees in return for Allen Russell, Bob McGraw and $ 40,000 in cash.

This trade would turn out to be the first of many cost-cutting moves by Red Sox owner Harry Frazee - the most famous of which would be the sale of Babe Ruth to the same Yankees at the end of the season. American League President Ban Johnson attempted to void the trade, however, and demanded Mays be suspended for walking out on his team. The Yankees and Red Sox refused to comply. The case threatened to split the League in half, with Chicago siding with the Red Sox and Yankees, and the other five teams supporting Johnson. However, the three minority teams held control over the League's board of directors and threatened to leave the league and join the National League. Ban Johnson was forced to step back in a move that marked his first major defeat since the creation of the American League in 1901 and Mays was allowed to join the Yankees.

Years of turmoil with the Yankees[edit] 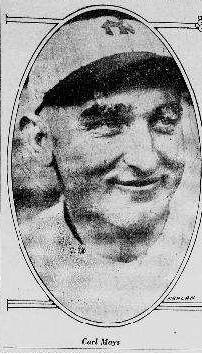 Carl Mays posted an excellent 1.65 ERA for the Yankees over the remainder of the 1919 season, collecting 9 wins in 13 starts, then stepped up as the team's ace in 1920, winning 26 games. This is when the unfortunate beaning of the Indians' Ray Chapman occurred, in the fifth inning of a dark, overcast game at the Polo Grounds on August 16. Eyewitnesses said that Chapman probably never saw the pitch that hit him, as he never moved his head. Mays claimed that the ball was wet and scuffed, causing it to sail inside and high. Opponents blamed Mays for the accident, with a number of teams petitioning Ban Johnson to have Mays banned from baseball. Mays spent a week in seclusion, then returned to the mound on August 23. He pitched a shutout on his return, and Cleveland went on to win the pennant and the World Series with rookie Joe Sewell taking Chapman's place in the line-up.

In 1921, Mays went 27-9 in 49 games for the Yankees, as the team won the first American League pennant in its history. He pitched three complete games in the World Series against the crosstown New York Giants, but he was charged with two losses. Still, in pitching a shutout in Game 1 of the Series, he became the first Yankee pitcher to start a World Series game. There were doubts expressed about Mays' performance in the two losses that followed, however, with speculation that he might have deliberately lost these. In all three starts, his opponent for the Giants was "Shufflin'" Phil Douglas, who would be forced out of baseball under similar allegations after the 1922 season. Similar questions surfaced after Game 4 of the 1922 World Series, in which Mays was on the losing end of a 4-3 decision to Hugh McQuillan of the Giants when the Yankees won a second consecutive pennant in 1922. Mays had fallen to a 13-14 record in 1922, and following his questionable World Series performance, manager Miller Huggins tried unsuccessfully to dump him. When that failed, he stopped using him in 1923 as Mays went only 5-2 with an awful 6.20 ERA in 23 games. The Yankees and the Giants faced each other for the third consecutive year in the World Series, but this time, Mays was left on the bench as the Yankees won their first-ever World Championship. He was sold to the Cincinnati Reds after the season.

Finishing up in the National League[edit]

Carl Mays experienced success again for the 1924 Reds, winning 20 games for the 5th time of his career, against nine losses, to regain his place among baseball's best pitchers. His 1925 season was shortened by injuries, but he still posted a solid 3.31 ERA in 51 innings, and then had his last excellent season in 1926, posting a league-leading 24 complete games in addition to a 19-12, 3.14 record. This made Mays the first pitcher to lead both the American and the National League in complete games, and he was also the first to win 20 games in both leagues post-1901 (pitchers such as Cy Young had won 20 games in the NL before the creation of the American League, and then repeated the feat in the AL). Mays pitched in only 19 games in both 1927 and 1928, and then completed his career with one season with the New York Giants in 1929, where he went 7-2 with 4 saves in 38 games, primarily out of the bullpen.

Mays finished his Major League career with a record of 207-126 and a 2.92 ERA over 15 seasons. Bill James remarked in one of his Baseball Abstracts that he is perhaps the only pitcher from his era to be fully qualified for the Hall of Fame but not to have been voted in. There is no doubt that the backlash from the Chapman beaning and his later World Series performances is what has kept him out.

As was the custom at the time, Mays still pitched two seasons in the minor leagues after washing out of the majors. He was 5-9 with a 4.75 ERA for Portland in 1930, 17 years after he had previously pitched in the city. He also spent part of the year with the Toledo Mud Hens, going 3-1 with a 3.21 ERA. He wrapped up his playing career in 1931 with Toledo and the Louisville Colonels, with a composite record of 11-15, 4.32. After his playing days, Mays was a scout for the Cleveland Indians for many years, as well as with the Kansas City A's (1962), and Milwaukee Braves (1963).

At the peak of his career, he set a record for most consecutive wins against one team, with 24 straight over the Philadelphia Athletics from 1918, when he was a member of the Red Sox, until 1923, when he was with the Yankees. He is tied with Christy Mathewson, who surprisingly also holds third place on the all-time list, with a 22-game winning streak against a different team.