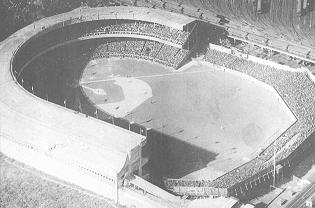 (Upper deck overhung field fence, therefore a home run could be shorter than the marked distance.)

Hitter or Pitcher Park?: Both

The first Polo Grounds, built on a former polo field, was used from 1883 to 1888. This had to be abandoned when the city of New York decided to run a street through the playing field. A second Polo Grounds, also known as "Manhattan Field", was hastily erected in 1889; it was only in use for two seasons, and in the second, 1890 a rival team in a rival league also calling itself the New York Giants, in the Players League, built a competing ballpark, originally known as "Brotherhood Park". When the Players League folded after the season, the National League Giants moved into the abandoned park, which of course became known as the "Polo Grounds" as well. Meanwhile, Manhattan Field was converted for use by college football teams and eventually fell into neglect. The third Polo Grounds was destroyed by fire in 1911 and the team temporarily moved into Hilltop Park, home of the American League New York Highlanders, while the fourth (and most famous) incarnation of the Polo Grounds was built.

Only two stadiums, the Polo Grounds and Sportsman's Park, have played exclusive host to the World Series, because it was the home ballpark of both participants, not counting the 2020 World Series which were played in a single neutral site. The first instance happened with the Polo Grounds when it was the home field of both the Yankees and the Giants in the 1921 and 1922 World Series. In 1923 the Giants evicted the Yankees, who went on to build the classic Yankee Stadium less than a mile away across the Harlem River.

To call this stadium quirky would be an understatement, as the ballpark was one big quirk. The distances down the foul lines were obscenely short yet there were no tall fences to prevent easy home runs, which should have made this a hitter's dream, but at the same time the fences went straight back to a maximum distance of 483 feet to the center field clubhouse. The clubhouse itself, at 515 feet from home plate and 60 feet high, had no home run line on it and it was unclear as to whether a batted ball hitting the roof would have been a home run. Some speculate that the ball needed to clear the fence at the back of the structure, an additional 90 feet. Since no one ever reached the top of the front wall the question was never answered. These idiosyncrasies should have made this stadium a pitcher's delight. So the Polo Grounds' hitter/pitcher alignment depended on where the ball was hit. Only four people ever hit home runs into center field: Luke Easter in a Negro Leagues game, Hank Aaron and Lou Brock, on consecutive days, and Joe Adcock. To add to the bonanza of oddities, the bullpens were in play in the nooks of the outfield wall. One could reason that they could have put the bullpens behind fences or in foul territory, but for whatever reason the Giants did not do either.