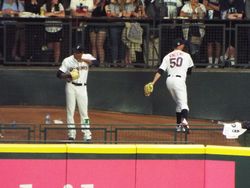 Edwin Diaz & Nick Vincent warming up in the Mariners' bullpen

The creation of the bullpen as a separate entity within a pitching staff is a relatively recent one. Until the end of the 1940s, teams may not have carried more than one or two specialized relievers, with starters on their off-day and swingmen doing most of the work when a starting pitcher had to leave a game early. The constitution of a more formal bullpen began in the 1950s and in that decade and in the 1960s, teams usually carried only four relievers, with one or two "relief aces" getting the bulk of the work. A five-man bullpen became the standard in the 1970s and 1980s, but this number has crept up inexorably since the start of the 1990s, and by the mid-2010s, some teams were using eight relievers in addition to a five-man starting rotation. That meant that rosters now included 13 pitchers, and 8 starting position players, leaving a mere four slots for other back-ups - three for American league teams who had to use a designated hitter on a daily basis. Ironically, this was bringing baseball back to its early days, when position players were almost never substituted, except in case of injury, and utility players able to play a number of positions becoming more valuable than they had ever been.

For many years, Wrigley Field was the last major league ballpark that featured bullpens in foul territory, unseparated from the field by a wall whilst being located near the foul lines. This led to problematic fielding conditions on balls hit to foul territory. Because bullpens are physically separate entities, it has led to a "bullpen phone" being installed in all major league dugouts. This allows a team's manager to speck directly to a delegate in the bullpen - either the bullpen coach or a bullpen catcher - to relay his instructions, such as asking for a specific pitcher to warm up. In the absence of a phone, these instructions can be communicated by hand signals, or by sending someone to run down to the bullpen with instructions.