The New York Highlanders were an American League baseball team that played from 1903-1912. In 1913, the became known as the New York Yankees. 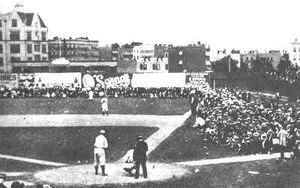 Hilltop Park, home of the Highlanders

The new ballpark for the new team was constructed at 165th Street and Broadway in Manhattan, one of the highest points on the island. Formally known as "American League Park", it was nicknamed "Hilltop Park" or "The Hilltop", and was signficantly smaller than the Polo Grounds, the Giants' home just a few blocks away. Publisher William Randolph Hearst's New York Evening Journal referred to the new club as the "Invaders" in 1903, but switched in the spring of 1904 to the name that would stick for several years: the New York Highlanders. The name was a reference to the team's location and also to the noted British military unit The Gordon Highlanders, which fit as the team's president from 1903 to 1906 was Joseph Gordon. By 1904, the team was also being called the "Yankees", a synonym for "Americans", but initially "Highlanders" was the most common unofficial nickname of the new team.

As the Highlanders, the team enjoyed brushes with success only occasionally, finishing second in 1904, 1906 and 1910, with 1904 being their closest approach to a league title. Much of the team's Hilltop Park days were spent in last place. Its somewhat corrupt ownership and a few questionable activities by some of the players (most notably first baseman Hal Chase) raised suspicions of game-fixing. Such suspicions have never been proven, although Chase was eventually banned from baseball for corruption.

The high point (and low point) of the Highlanders' existence came on the last day of the 1904 season at Hilltop Park. New York pitcher Jack Chesbro threw a wild pitch in the ninth inning that allowed the eventual pennant-winning run to score for the Boston Americans. This had historical significance in several ways. The presence of the Highlanders in the race led to the Giants' announcement that they would not participate in the World Series, claiming they would not play a "minor league" team. Although Boston had won instead, the Giants stuck by their word and still refused to participate. The resulting backlash by the press caused Giants owner John T. Brush to take a stance and lead the committee to formalize the rules governing the World Series. This would be the last time until the strike-truncated year of 1994 that the World Series would not be played. It would also be the last time for a full century that the Boston AL team, who would later formally become the Boston Red Sox in 1908, would beat the New York AL team in a pennant-deciding game.