One of the American League's original teams, the Cleveland Indians had a history of intermittent success and long periods of ineptitude. The team won their first World Series in 1920, then didn't make the Fall Classic again for 28 years. The 1948 season is the most fondly remembered by Indians fans, as the team won the American League's first ever tiebreaking playoff game (against the Boston Red Sox) and took the World Series in six games from the Boston Braves. They won the pennant again in 1954 with a then AL-record 111 wins, but were swept in the World Series by the New York Giants.

There followed a period of horrible doldrums. Team management traded slugger Rocky Colavito for Harvey Kuenn before the 1960 season. Colavito had led the league in home runs in 1959, Kuenn in batting average. Kuenn had a decent season in 1960, but missed 28 games and was traded after the season ended. Colavito went on to be a star with other teams, playing in the All-Star Game in four of the next five years. Only six times between 1960 and 1993 did the team have a winning record; only once in the 1960s, 1970s and 1980s did they finish as high as third (Of the 24 teams in existence when the leagues went to divisional play in 1969, only the Washington Senators/Texas Rangers franchise went longer before making postseason play). 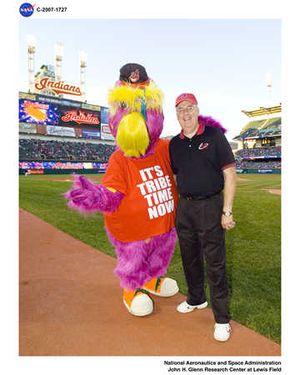 Over time, Municipal Stadium was allowed to deteriorate and there were rumors that the team would be moved to another city. These rumors served as inspiration for the hit movie Major League, released in 1989. However, new ownership sparked a revival of interest, and the team moved into new Jacobs Field in 1994. Though the 1994 season was unfinished because of the MLB labor dispute, in 1995 the Indians won the AL Central Division title, and won it again in five of the next six seasons. They won the AL pennant in 1995 and 1997, but lost the World Series in both years. The loss was particularly excruciating in 1997, as closer Jose Mesa blew a late lead in the deciding 7th game of the Series against the Florida Marlins. The team's hitting stars were Albert Belle, Kenny Lofton, Jim Thome and Omar Vizquel, while the top pitchers were Charles Nagy and Bartolo Colon.

The Indians continued to be competitive for the remainder of the 1990s, then fell back a notch in the 2000s. However, in 2007, they came within one game of returning to the World Series, before losing the ALCS to the Boston Red Sox after taking a 3 games to 1 lead. The team's stars during the 2000s were pitchers CC Sabathia and Cliff Lee, who won back-to-back Cy Young Awards and C Victor Martinez. They were all gone via trade as the team headed into the 2010s.

The Indians came back to prominence in 2016, when they beat out the defending World Series champions Kansas City Royals and the Detroit Tigers for a division title. They then won the ALDS and ALCS in impressive fashion to meet the Chicago Cubs in a much-anticipated World Series matchup of two teams seeking to overcome extremely long championship droughts. The Series once again went down to the wire, the Indians only bowing down in extra innings in Game 7. They repeated as AL Central champions in 2017, when they set an American League record with 22 consecutive wins in August and September. However, this time they were stunned by a young New York Yankees team in the Division Series, losing in five games. The team's major stars those years were SS Francisco Lindor, SP Corey Kluber, and RPs Cody Allen and Andrew Miller, under the leadership of manager Terry Francona.

Chief Wahoo, the Indians' controversial mascot which was abandoned in 2019

The team adopted the name "Indians" in 1915, after having been known informally in its first seasons as the Blues, Brocos, and then the "Naps", after team captain Napoleon Lajoie, one the biggest stars of the early years of the American League. There is a story going around that the name Indians is in honor of Lou Sockalexis, who was one of the first Native American players in the majors when he appeared with the Cleveland Spiders in the 1890s. While it is true that the Spiders were sometimes called the Indians in 1897, the nickname was considered derisive and was accompanied by other imagery derogatory to Native Americans, such as "scalping" opponents and so on. So it is hard to see the team settling on the name in 1915 as something positive. However, the name did not attract significant controversy until the end of the 20th century, when the Indians' appearance in two World Series in 1995 and 1997 brought national attention, and criticism of the name and especially of the team's mascot, Chief Wahoo, a caricature of a smiling Native American figure. Still, not much changed, as the team continued to use both its name and mascot. In 2014, a Native American activist sued the team for $9 billion, a number "representing nearly 100 years of racism and profiteering since the team adopted its current name in 1915." The lawsuit came on the heels of a strong campaign to see the Washington Redskins of the National Football League change their name.

The controversy was fueled by the Indians' appearance in the 2016 World Series, and Commissioner Rob Manfred asked the team to phase out the mascot. CEO Paul Dolan acceded to the demand by announcing in January of 2018 that the mascot would no longer be used on uniforms or at the ballpark starting in 2019, although some merchandise sporting the effigy would still be sold locally. But calls to change the team's name persisted, and in July 2020, with the nation in a deep reflection about racism in the wake of the death of George Floyd, the team announced that it was considering other possible names. With the debate over the team's name now unavoidable, Ohio Senator Sherrod Brown suggested they use the name "Buckeyes", in tribute to their home state and to the Negro Leagues team that used the name. On December 13th, after the Redskins had acceded to pressure and become the "Washington Football Team", the New York Times reported that the team had decided to drop the "Indians" part of its name, although it was not clear if the change would come into effect immediately or after the 2021 season, and what the new name would be. On July 23, 2021, the team announced that it would be known as the Cleveland Guardians beginning in 2022, the official name change taking place on November 19th.