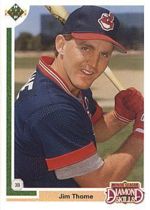 Inducted into Hall of Fame in 2018

Jim Thome is one of the great sluggers in baseball history. When Thome was at bat, it was likely that he would either homer, strike out or walk. On August 15, 2011 he became the 8th player to hit 600 home runs. He has also led the league in walks three times with over 120 each. He retired with an amazing 40 percent career OBP, despite his propensity to stike out (182 times one season).

During high school in Bartonville, Illinois (not far from his birthplace, Peoria), Thome was all-state in baseball and basketball. He went on to play both sports at Illinois Central College. He was signed as a 13th round pick in the 1989 amateur draft by the Cleveland Indians and scout Tom Couston. Thome started his minor league career in the Gulf Coast League in 1989. He was not a particularly prolific home run hitter in the minors from 1989 to 1992, with a total of 26 in four seasons. Things turned around when his manager with the AAA Charlotte Knights in 1993, Charlie Manuel taught him to point his bat at the pitcher, in Roy Hobbs fashion, to remind himself to hit the ball up the middle. That helped to unleash his power, which was mainly up the middle, contrary to most power hitters, who tend to pull the ball. He hit 25 homers for Charlotte that year and another 7 in 47 games with Cleveland, and would neverlook back after that.

Thome first came up shortly after turning 21 and was with the Cleveland Indians for over a decade. Spending part of his 1992 and 1993 seasons in the minors, he was slugging over .500 and it was clear that he should be at the major league level full time. He played almost exclusively third base at the major league level from 1991 to 1996, but after that he never played another game at third, appearing only at first base and DH.

Thome never won an MVP award, but finished as high as fourth. However, in 2002 when he hit 52 homers and led the league in slugging, he won the Roberto Clemente Award. He hit a home run in 7 consecutive games that year, one game short of the all-time record, held by Dale Long, Don Mattingly and Ken Griffey, Jr. He later won the Lou Gehrig Memorial Award in 2004, and in a 2005 survey was chosen the "Best Teammate in Major League Baseball" by a wide margin.

In 2006 with the Chicago White Sox, he set a record by scoring a run in each of the team's first 17 games of the season. His hot start also included 10 home runs in the month of April.

As of late in the 2007 season, Thome was #4 on the all-time list for fewest At-Bats-Per-Home-Run. The three players ahead of him were Mark McGwire (in a shorter career), Babe Ruth, and Barry Bonds. Thome had hit a home run every 13.6 at-bats, on average.

Thome joined his fourth team in 2010, the Minnesota Twins, and continued to hit for power although one of the oldest players in baseball. He became the oldest player to reach the 600-home run mark (40 years, 353 days) on August 15, 2011, hitting number 599 and 600 in consecutive at-bats in the same game. At the same time he was the 2nd fastest player in history to reach 600 home runs, doing so in 8,167 at bats. Only Babe Ruth (6,921 AB), ranks ahead of him on that list. Ten days later, the Twins, having a dreadful season marred by an unending string of injuries, placed him on waivers and he was claimed by his original team, the Cleveland Indians. On August 25th, the Twins agreed to trade him to the Indians in return for a player to be named later. He finished the year by hitting .296 in 22 games for the Indians. He then split the 2012 season between the Phillies, where he hit .242 in 30 games, and the Baltimore Orioles for whom he hit .256 in 28 games and hit his final three big league homers. He retired after the season with a total of 612 homers.

On August 2, 2014, Thome signed a one-day contract with the Indians in order to officially retire with the team. The club put on a big feast for him unveiling an eight-foot statue of the slugger outside of Progressive Field. Team President Paul Dolan commented that Thome looked good in an Indians uniform and expressed the hope that he would be wearing the team cap when he was eventually enshrined in the Hall of Fame. He first became eligible for Cooperstown in its 2018 ballot, and the only question was whether he would be voted in on the first ballot - which was a particularly loaded one that year - or would have to wait a couple of years for the honor. When the results of the vote came, in, he cleared the 75% bar easily, receiving 89.8% of the vote. While there was no question that he would be pictured wearing an Indians cap on his plaque in Cooperstown, what was interesting was that he insisted that it be the "Bloc C" variation, and not the one sporting the controversial image of Chief Wahoo. This came shortly after the Indians had announced they would be phasing out the caricatural image before the 2019 season. His number 25 was retired by the Indians on August 18, 2018.

Thome was the first major leaguer to hit 13 career walk-off home runs. The old record of 12 had been shared by Babe Ruth, Jimmie Foxx, Stan Musial, Mickey Mantle and Frank Robinson. Thome was the 4th player to hit 100+ homers for three different clubs, following Darrell Evans, Reggie Jackson and Alex Rodriguez. He homered in 48 different major league ballparks but - absurdly - never at Coors Field, the most homer-friendly ballpark of his day! He is also a Three True Outcomes superstar: in addition to his homers, he is second all-time in strikeouts (behind Reggie Jackson) with 2,548, but still managed to maintain an outstanding OBP of .402 thanks to 1,747 bases on balls. That last number puts him 7th all-time. His batting average when not striking out is also absurdly high, at .396, the fourth-highest ever, a sign of how hard he hit the ball when he made contact.

When interviewed about possible steroid use, Thome denied ever having taken steroids, saying that he was a big guy who grew up on a farm, and developed his strength doing farm duties.