Mickey Charles Mantle
(The Mick, The Commerce Comet, or Muscles)

Inducted into Hall of Fame in 1974 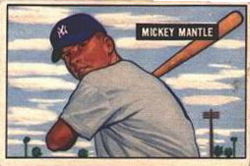 "The best hitter I ever saw was Ted Williams; the most complete player, Joe DiMaggio; the most exciting - Mickey Mantle." - Gus Zernial

"We never thought we could lose as long as Mickey was playing. The point was, we had Mickey and the other team didn't." - Tom Tresh

Mickey Mantle was blessed with what many consider to be the most prolific combination of power and speed in baseball history. It began in 1931 when he was named after Mickey Cochrane. Mantle joked that he was happy his father didn't know Cochrane's real name was Gordon. He was signed by the club by Tom Greenwade in 1949.

"I never saw anybody hit the ball so hard. When he swings the bat, you just have to stop and watch." - Phil Rizzuto

In 1953, Mickey hit a baseball in Washington's Griffith Stadium batting righthanded that is estimated to have been hit 565 feet. It is considered the first tape measure home run. Twice in his career Mantle came close to hitting a fair ball out of Yankee Stadium (pre-1976 reconstruction) once right-handed and once left-handed. Both times the balls hit the decorative copper facade that was on the front of the Yankee Stadium roof. Each time the balls were rising on a line drive and were estimated if not stopped to have gone at least 700 feet.

With all of Mantle's power, he suffered though an assortment of injuries and his bones were beset by osteomylitis, which weakened his bone structure. The first of his injuries occurred in the 1951 World Series against the New York Giants when he got his spikes caught in a drainage valve in the Yankee Stadium outfield while chasing a fly ball hit by Willie Mays.

In 1956, Mantle won baseball's Triple Crown leading the American League in batting average, home runs, and RBI's. In 1961, Mantle hooked up with teammate Roger Maris to chase after Babe Ruth's one-season home run record of 60. Much was made of the fact that the record would be broken in a 162-game season, when Ruth had done it in a 154-game season. The result was that some record books listed Maris as holding the record for a longer schedule and Ruth the record for shorter ones. Mickey Mantle was forced out of the lineup in September due to an injury; he finished with 54, a record for switch-hitters that still stands. Even with the late-season injury, he played in over 150 games. It was the fourth and final time in his 18-year career that he was healthy enough to do so. And it gives us yet another clue as to what could have been, since 1961 was his only 150+ game season in which he did not lead the league in HR's.

With his hitting skills having seemingly quickly eroded since age 33, and with his career batting average falling under .300, Mantle retired after the 1968 season. A closer look at his last few seasons changes the narrative regarding how much his skills eroded, however. In 1966 he only had 393 plate appearances, which did not qualify him for most of the leader boards. However, his .288 average and his OPS would have tied for 3rd highest in the AL. His at-bats per HR and slugging percentage tied for the 2nd highest and his WAR of 4.7 was number 7 on the leaderboard with only 333 at-bats. And from June 28 to July 3rd he blasted 8 HR's in 6 games. The only game he didn't homer was on June 30th when he was walked three times. In 1967, his base out wins added and win probability added was 5th best in the league. On the Yankees, he led the team in HR's, OBP, SLG, OPS and OPS+ which was 7th in the AL. Even his last season was not as bad as historians normally describe it. His .237 average was a personal low, but it was 7 points above the AL average and 23 points above the .214 the Yankees hit that year. He still led the team in HR's and was in the top 10 in many of the newer stats such as win probability - 4th; adjusted batting wins - 7th; adjusted OPS - 8th. Finally a close look at the numbers reveals that he lost his lifetime average of .300 due to ending the 1967 season going 2/31 and getting only 1 hit in his last 18 AB's in 1968. In both cases he could have sat out with injuries and in hindsight he should have.

He is remembered for his tremendous power, but his speed was also outstanding: in 1958, he hit three inside-the-park homers, something no Yankees player has done since. In fact, no Yankee had hit even two such homers in a season until Aaron Hicks in 2018.

He was inducted into baseball's Hall of Fame on January 16, 1974, along with his longtime friend and teammate Whitey Ford. He never managed, but briefly coached with the Yankees in August and September of the 1970 season.

On February 2, 1983, Hall of Famers Mantle and Willie Mays accepted greeter positions at a casino in Atlantic City, NJ. The next day, Commissioner Bowie Kuhn banned both of them. On March 18, 1985, Commissioner Peter Ueberroth reinstated both men. 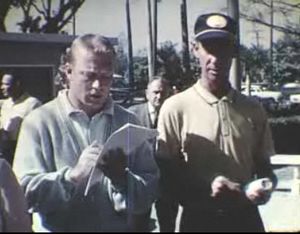 Mantle signing an autograph in the early 1960's

Perhaps the most notable, yet rarely discussed of Mantle's achievements, concerns his World Series home run total (18), a number, which, one baseball writer said years ago, will never be surpassed. This is a large claim, since, in sports, records are made to be broken. However, a closer look indicates that Mantle's 18 WS home runs may stand forever. First, we must remember that getting the chance to play in a WS is a difficult task, and repeating year after year is even more rare. Even the present-day Yankees, who are always in a postseason race, find it nearly impossible to win a spot in the October Classic on a regular basis. This means that a player's chances of challenging Mantle's HR record depends on that player having as many chances to bat as possible. That's the main obstacle. Mantle was lucky enough to play for the Yankees during some of their most prolific years, thus giving him a chance to play in 65 WS games which allowed him 230 at bats. These staggering numbers may indicate how difficult it will be for any player to challenge his home run total. Just for the record, home run kings Hank Aaron and Barry Bonds don't even figure in this discussion. Aaron has a total of 3 WS homers while Bonds has 4. Even more amazing is the fact that the superb Willie Mays played in 4 World Series (20 games, 71 at bats) with 0 home runs. This should give us some indication how safe Mantle's record seems to be.

"If Mickey had good legs throughout his career, he would have been an unbelieveable ballplayer." - Ralph Houk

"If he had [Joe] DiMaggio's serious bear-down attitude, there's no telling how great he could have been. With his one good leg, he could outrun everyone." - Gene Woodling

"When he took BP everybody would kind of stop what they were doing and watch." - Jim Kaat