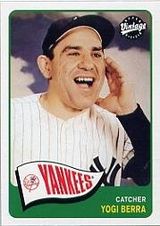 Inducted into Hall of Fame in 1972

"He looks cumbersome but he's quick as a cat." - Casey Stengel

"Yogi had the fastest bat I ever saw." - Hector Lopez

Yogi Berra is widely regarded as one of, if not the, greatest catchers of all-time. He was an anchor behind the plate with fourteen New York Yankees World Series teams, winning a record 10 rings, all whilst receiving 18 All-Star nods and rewriting the book for offense as a catcher (totals which would later be topped). Writer and statistician Bill James, in his 2004 ranking revision, picked Berra as the #1 catcher of all time. Arguments can certainly be made (and have been made) for Josh Gibson, Johnny Bench and Mike Piazza most notably and presumably for other top backstops like Mickey Cochrane, Roy Campanella and Bill Dickey.

Yogi wore a major league uniform from 1946 to 1989 as a player, coach and manager for both the New York Yankees and the New York Mets (winning pennants as the skipper of each team), and finally as a coach for the Houston Astros. The cartoon character "Yogi Bear" was named after him, and he is also quite famous for his aphorisms (see below). Berra was affectionately known by the sportswriters during his career as "The Little Squat Man."

Berra grew up in an Italian area of St. Louis, MO near Elizabeth Avenue, and growing up was very close friends with Joe Garagiola. Bobby Hofman, another contemporary major league player lived nearby, as did future broadcaster Jack Buck. Hofman is the one who gave Larry the nickname that stuck with him the rest of his life, as he thought he resembled an Indian holy man in a movie the two had seen together. Yogi left school following the eighth grade to help earn income for his Italian immigrant family. The St. Louis Cardinals signed Garagiola, while the Yankees signed Berra and Hofman ended up with the New York Giants. Signed in 1943, he played for the Norfolk Tars for one season, then missed the 1944 and 1945 seasons serving in the Navy during World War II. Berra served in combat, fighting in North Africa, Italy, and at D-Day in France. He was stationed on a rocket launcher off the coast of Normandy just after D-Day. 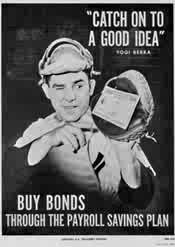 People tend to know that Berra won three MVP awards (1951, 1954 and 1955, but may not know that in the seven-year period from 1950-1956, he was always in the top four in the voting. He hit 30 home runs twice, exceedingly rare for a catcher at that time, and drove in over 100 runs five times during his career. He was on the All-Star team in 15 of his 19 major league seasons, making 18 ASG appearances (there were two All-Star games during several seasons of his career). His offensive numbers are good, but what tends to make him legendary is the combination of excellent offense and great defense.

Yogi was a hitter in the Al Kaline tradition - while he had decent power, and usually hit 20-30 home runs, he also had a good batting average to go with the power. His best mark was .322 in 1950, a year when the American League as a whole hit .271. He was known as one of the best "bad ball" hitters of all-time, able to reach out to get pitches outside of the strike zone and knock them for base hits; that made it very difficult for pitchers to have any sort of strategy when facing him.

He did not lead the league in offensive categories, but was in the top ten in slugging and home runs nine times. According to the similarity scores method, the most similar player is no surprise at all: Johnny Bench.

In 1963, Berra transitioned into a role as a player/coach with the Yankees. Despite only appearing in 64 games, he still hit 8 homers. The next year, he was promoted to manager, replacing Ralph Houk. He led the Yanks to the World Series (which they lost to the St. Louis Cardinals in seven games) but was fired afterwards, with the team citing a lack of communication in the clubhouse. He was replaced by Johnny Keane, who had managed the Cards in the just completed Series. That front office maneuvering is often cited as marking the end of the great Yankee dynasty that began with Casey Stengel's appointment as manager in 1949.

Berra moved across town in 1965, joining the New York Mets coaching staff under his mentor Stengel and even appearing in a handful of games. He remained a Mets coach until 1972, when he took over as the club's skipper upon the death of Gil Hodges. After finishing in third place that year, he led the team on a remarkable run in 1973. Although the Mets were in last place as late as August 30th, the club went 19-8 in September to capture the NL East title and beat the heavily favored Cincinnati Reds in the NLCS to reach the World Series (which they ultimately lost to the Oakland Athletics in seven games). Berra remained manager of the Mets until 1975.

In 1976, Berra returned to the Yankees coaching staff, and in 1984, he was promoted again to manager. Early in 1985 he was fired and replaced with Billy Martin. Team owner George Steinbrenner was going through his revolving door of managers in those years, and Berra actually posted one of the best winning percentages of all those who managed the Yankees in the first phase of Steinbrenner's ownership (i.e. until the appointment of Joe Torre as manager in 1996). Berra went on to serve on the Houston Astros coaching staff from 1986 to 1989. 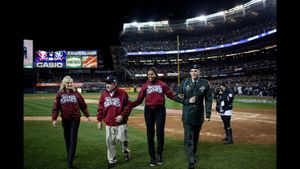 Berra at Game 1 of the 2009 World Series with Mrs. Obama and Mrs. Biden

Yogi Berra was elected to the Baseball Hall of Fame on January 19, 1972 by the Baseball Writers Association of America. The Yankees retired number 8 for him and his predecessor, fellow Hall of Famer Bill Dickey, on July 22, 1972. Along with Dickey again, he joined the Yankees' Monument Park in a ceremony on August 21, 1988. Along with Johnny Bench, he was named to the Major League Baseball All-Century Team at catcher in 1999.

He is highlighted in the book Heroes Behind the Mask as one of the top catchers of all-time.

Berra is still the only player with three career home runs in the World Series against the same pitcher (Don Newcombe); all three happened to be in the 1956 Series. This is also a postseason record, tied with eight more recent batter-pitcher combinations.

Yogi was part owner of YooHoo Company [1] until 1981. He is credited with making the chocolate beverage popular. He used to visit the New Jersey plant often. Starting in 1958, he operated a bowling alley in Clifton, NJ alongside former teammate Phil Rizzuto; Rizzuto's brother John was responsible for the day-to-day management of the venture. The two partners sold their shares in 1965, but the center remained open until 1999.

Yogi was granted an honorary Ph.D. by Montclair State University in Montclair, NJ, which is home to The Yogi Berra Museum and Learning Center and Yogi Berra Stadium. Berra also authored several books.

His first baseball card appearance was in the 1948 Bowman set.

He is the father of Dale, Larry and Tim Berra (Wide Receiver for the NFL's Baltimore Colts in 1974). His granddaughter, Lindsay Berra, Larry's daughter, is a reporter for mlb.com. He married his wife, Carmen, who was also from St. Louis, on January 26, 1949. The marriage lasted 65 years, until Carmen passed away from complications from a stroke on March 5, 2014. He lived for another year, dying in his sleep at an assisted living facility near his long-time home of Montclair on September 22, 2015 at 90. On November 16th, it was announced that he would be one of 17 recipients of the Presidential Medal of Freedom, to be awarded posthumously by President Barack Obama; Willie Mays was also among the list of recipients that year.

"It gets late early out there."

"Nobody goes there anymore. It's too crowded."

"You can observe a lot by just watching."

"I knew the record would stand until it was broken."

"In theory there is no difference between theory and practice. In practice there is."

"Even Napoleon had his Watergate."

"It ain't like football. You can't make up no trick plays."

"So I'm ugly. So what? I never saw anyone hit with his face."

"I didn't really say everything I said."