The 1950 World Series matched the defending champion New York Yankees against the Philadelphia Phillies. The Phillies, a particularly young team which came to be known as the "Whiz Kids", had won the National League pennant in dramatic fashion on the final day of the season to garner their second pennant - their first in 35 years. Their Cinderella story would end there as the Yankees swept the series in four games for their second consecutive championship, and their 13th overall. The final game in the series resulted in the New York Yankees winning, 5-2 over Philadelphia. It was the only game in the series decided by more than one run. 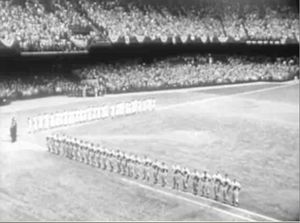 Both teams on the field.

Curt Simmons, one of the Philadelphia starting pitchers during the season, had been called to military duty in September and was unavailable for this Series.

Phillie ace Robin Roberts didn't start Game 1 because he had had three starts in five days including the pennant winner on the final day of the regular season — played October 1st (three days before Game 1). Instead, manager Eddie Sawyer made the bold move of starting his relief ace, Jim Konstanty, who had not started a game all season, in Game 1. Konstanty did well, allowing a single run in 8 innings, but still lost, 1-0.

Because his #1 starter, Robin Roberts, had just pitched in three of the last five games of the frantic pennant race, Phils manager Eddie Sawyer surprised the world by naming his bullpen ace, Jim Konstanty, to open on the mound for Philadelphia, opposing 21-game winner Vic Raschi of the Yankees. Konstanty was outstanding, allowing just 4 hits and a run in 8 innings, but Raschi was tougher, shutting out the Phils on only two hits en route to a 1-0 victory in the opener. 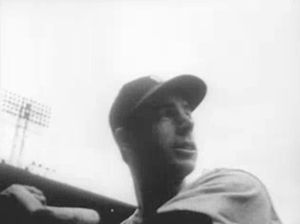 DiMaggio steps up in the 10th.

20-game winner Robin Roberts and Allie Reynolds both pitched outstanding baseball for nine innings, as strong pitching and stout defense again prevailed in the series. Gene Woodling drove in Jerry Coleman for a Yankee run in the 2nd, and Richie Ashburn tallied Mike Goliat in the 5th, forging a 1-1 tie which held up through nine full innings. This set the stage for Joe DiMaggio, leading off the 10th inning for the Yankees. With one swing, DiMaggio smashed a home run to left field to provide the difference in a 2-1 extra-inning win for the Yankees as the series shifted to New York.

DiMaggio had a hand in holding the Phillies at bay long enough to get his key at-bat. In the 6th inning, Del Ennis hit a deep fly to center, but DiMaggio made a spectacular over-the-shoulder running catch, near the 400-foot marker at the base of the scoreboard in right-center. This play is far less well-known but was similar-looking to the famous Willie Mays catch in the 1954 World Series.

Phils lefty Ken Heintzelman started the third game vs. Yankee stalwart Ed Lopat. Heintzelman continued the Phils' great pitching, carrying a 2-1 lead into the 8th inning, when he lost control and walked the bases loaded. Konstanty relieved him and got Bobby Brown to ground to shortstop Granny Hamner, but Hamner misplayed the ball to allow the tying run to score. Russ Meyer came on for the Phillies in the last of the 9th. After retiring the first two batters, Meyer allowed consecutive singles to set the stage for Jerry Coleman, who drove in the winning run with a base hit to give the Yankees a 3-2 win.

Phillies starter Bob Miller matched up against rookie Whitey Ford, making his first World Series appearance, as the Yankees tried to wrap up the series in four straight. New York scored two runs in the 1st inning, and with the help of Yogi Berra's homer, three more in the 6th to take a commanding 5-0 lead. The first two Phils reached base in the 9th, before Ford got the next two out. Andy Seminick then flied to left, but left fielder Gene Woodling dropped what looked like the series-ending out, allowing two runs to score. Mike Goliat kept the inning going with a hit, and Casey Stengel removed Ford to bring in Allie Reynolds. Reynolds struck out pinch-hitter Stan Lopata, giving the Yanks a 5-2 win and the World Series victory.