The 1910 World Series featured the Philadelphia Athletics and the Chicago Cubs, with the Athletics winning in five games to earn their first championship. 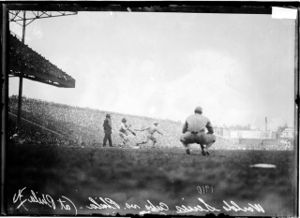 World Series game between the National League's Chicago Cubs and the American League's Philadelphia Athletics played at Shibe Park in Philadelphia, Pennsylvania in 1910 (exact date not given)

This page is in need of some additional content. Please help the Bullpen by expanding it, or learn how to contribute.
Retrieved from "https://www.baseball-reference.com/bpv/index.php?title=1910_World_Series&oldid=1023928"
Categories:
Hidden category: