The 1971 World Series between the Pittsburgh Pirates and the Baltimore Orioles was an epic pitching battle that energized the baseball world in both Pittsburgh and Baltimore. The Orioles took an early two games to none lead in Baltimore behind the stellar pitching of Dave McNally and Jim Palmer. The next three games in Pittsburgh were dominated by the Pirates who swept the homestand behind the strong arms of Steve Blass and Nelson Briles who both pitched and won complete games for the Pirates. Finally, the two teams returned to Baltimore, the Pirates holding a 3 games to 2 lead in the series. Game 6 resulted in the Orioles using both Palmer (as a starter) and McNally (as a reliever) to win a one-run game and tie the series at three games apiece. This forced a Game 7, which was a rematch of Game 3 with Mike Cuellar of the Orioles, a 20-game winner in 1971, and Steve Blass, who had won the third game of the series just five days before. In a tight game, Blass pitched his second complete game of the Series and the Pirates won, 2-1.

Besides the incredible pitching talent in these games, the talent in the field was even more impressive with greats like Brooks Robinson, Frank Robinson, and Boog Powell leading the Orioles, and Roberto Clemente, Willie Stargell and Manny Sanguillen leading the Pirates; Bill Mazeroski was also on hand, although he was merely a pinch-hitter by now, with his career winding down.

One of the more significant events in the series was Game 4 which was played at Three Rivers Stadium in Pittsburgh. This game was the first night game ever to be played in the World Series. Since that time, nearly every week-day World Series game has been played at night to accommodate the television audience. 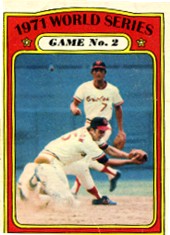 In Baltimore's extra-inning Game 6 win, Pittsburgh's Roberto Clemente did all he could to win this Series in six, single-handed. Stranded after his 1st-inning triple to the wall in left center, his 3rd-inning solo shot put Pittsburgh up, 2 - 0. He was retired on long flies in the 5th and 8th innings while Pittsburgh frittered away its modest margin. By his next at-bat, in the 10th inning, the go-ahead run standing at second with first base open thanks to Dave Cash's ill-advised decision to steal second base with two strikes on the batter immediately preceding Clemente, one would have to have been a fool let this man beat you (even with Willie Stargell on deck, albeit an injured Stargell who had done nothing the entire postseason). Well, whatever else he may have been, Baltimore manager Earl Weaver was no fool. Clemente was walked intentionally, Stargell was walked semi-intentionally, and Al Oliver flied out to center. Just moments later, the ailing Frank Robinson proceeded to carry his team to one more tomorrow, challenging the somewhat suspect arm of centerfielder Vic Davalillo on two consecutive plays – going first to third on Merv Rettenmund's single up the middle and scoring on Brooks Robinson's relatively shallow fly ball.

All of Clemente's offensive contributions notwithstanding, the reason this game even got to the 10th inning was the defensive play Clemente pulled off in the bottom of the 9th, namely a no-look, one-hop strike from Memorial Stadium's right-field corner, 310 feet away, to catcher Manny Sanguillen, preventing Mark Belanger at first, running on contact on Don Buford's two-out double, from even attempting to score. The game then went to extra innings and, while obviously Clemente's play had not affected the game's outcome, it had enormous significance nonetheless. By extending the game, he forced Baltimore's best player, the banged-up Robinson, to win this game with his legs – which he did but at a great cost, namely an aggravated right Achilles tendon injury and, worse still, a torn left hamstring. Thus, in Game 7, the O's would have the services of their best player in name only. The spirit was willing, but the visibly hobbled Robinson's flesh was, sadly, unable.

This page needs wiki formatting, links and a general cleanup.