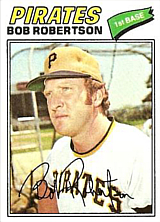 Bob Robertson was a big first baseman who could hit for power but often had his way blocked with the Pittsburgh Pirates by such stars as Willie Stargell and Al Oliver. He hit 26 and 27 home runs in 1970 and 1971 respectively before a chronic back problem hampered his production.

Robertson had a very good minor league record. He debuted in 1964 with a .302, 13, 63 line for the Salem Pirates. He led Appalachian League third basemen with 43 putouts, 102 assists, 7 double plays, and 36 errors. In 1965, he led the Western Carolinas League with 32 homers, 98 RBI, and 258 total bases. He also led WCL third basemen with 101 putouts, 242 assists and a .932 fielding percentage. He led the 1966 Southern League with 32 homers, 99 RBI, 258 total bases, 131 putouts and 26 errors at 3B for the Asheville Tourists. Robertson was converted to first base during the 1967 season. He missed the entire 1968 season after surgery for a kidney obstruction. He returned in 1969 to lead the International League with 34 big flies. He was named to the 1966 All-Star team for the Southern League at third and the 1969 team for the International League at first.

His three-homer game in the 1971 NLCS against the San Francisco Giants marked the first time a Pirate had hit multiple home runs in a postseason game; it would be 42 years until Russell Martin became the second.