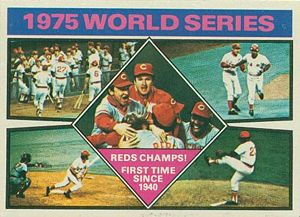 The 1975 World Series was between the Boston Red Sox and Cincinnati Reds. It was ranked as the second greatest World Series by ESPN[1]. Cincinnati won the series, 4 games to 3.

The Reds won the series in seven games on a 9th-inning single by Joe Morgan. The sixth game of the Series was a 12-inning classic at Boston's Fenway Park. While there are many memorable moments from that game (among them Red Sox pinch hitter Bernie Carbo hitting a game-tying home run in the 8th; Reds reliever Will McEnaney pitching out of a bases loaded, no out jam in the bottom of the 9th; and Boston's Dwight Evans making a spectacular 11th-inning catch to rob Joe Morgan of a go-ahead home run), it is remembered in Boston for the walk-off home run hit in the bottom of the 12th by Carlton Fisk. Fisk's home run gave the Sox a 7-6 win to send the series to a deciding seventh game, which the "Big Red Machine" won to clinch the first of back-to-back World Series championships.

The series also included Red Sox starter Luis Tiant's extended mediations while communing with someone in center field during his windups while pitching, a controversial play involving Fisk and the Reds' Ed Armbrister in Game 3, Tony Pérez' home run off a Bill Lee blooper pitch in Game 7, and many other memorable events.

Quotes of the Series[edit]

And Cincinnati has won the World Championship, beating the Red Sox 4 to 3. - Curt Gowdy, on NBC Television after the final out.

Carbo hits it into dead center into the bleacheeeeers, WE'RE TIED UP!! - Joe Garagiola, calling Bernie Carbo's dramatic game-tying three-run home run in the bottom of the 8th inning of Game 6.

This is some kind of game, isn't it? - According to Carlton Fisk, Pete Rose turned and said this to him when Rose came to bat in the 10th inning of Game 6.

This page is in need of some additional content. Please help the Bullpen by expanding it, or learn how to contribute.
Retrieved from "https://www.baseball-reference.com/bpv/index.php?title=1975_World_Series&oldid=1003458"
Categories:
Hidden category: