Fenway Park, the home of the Boston Red Sox, is the oldest ballpark still in use in the major leagues, having opened for the start of the 1912 season, and being used without interruption ever since (except for the 1915 World Series which was moved to Braves Field because of its greater seating capacity, and Sunday home games between 1929 and 1932, which were also played in Braves Field because of a local by-law that prevented the use of Fenway Park for being too close to a church). In addition to World Series games played by the Red Sox, Fenway hosted the Boston Braves in the 1914 World Series, before the opening of Braves Field. Fenway Park was the first ballpark to celebrate its 100th anniversary, in 2012.

From May 15, 2003 to April 8, 2013, the Red Sox had a streak of 820 consecutive sell-outs of home games at Fenway Park. The streak included 794 regular-season games and 26 postseason contests. It was the longest in major league history, easily surpassing the previous record of 455, held by the Cleveland Indians at Jacobs Field. Indeed, it was the longest in the history of North American professional sports, beating a streak of 814 sell-outs by the Portland Trail Blazers of the National Basketball Association, achieved over a much longer period. The streak ended on April 10, 2013, when the paid attendance for a game against the Baltimore Orioles was 30,862, well below the stadium's capacity for night games which is 37,493. What makes it even more remarkable is that Fenway's capacity was increased by 5000 seats during the period of the streak. 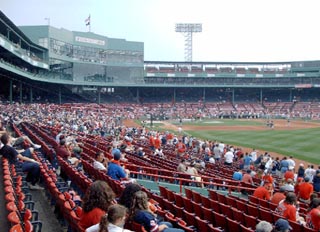 Fenway Park is known for its quirky configuration, forced by the constraints of urban geography. Its left field area is very small, but is bordered by an extremely high fence, the Green Monster. The Monster turns line drives which would go for extra bases elsewhere into singles, but also allows what would otherwise be harmless fly balls to become doubles or homers. In contrast, the center field area is extremely deep. While the right field corner is very close, with the "Pesky Pole" (the right foul pole) representing the shortest distance for a home run to travel in the major leagues, the fence then juts out at very steep angle, making it very difficult to hit a homer to right field unless the ball is hit very close to the foul line. The outfield has a number of nooks and crannies, as the deepest spot is not in dead center, but slightly to the right of it, and the height of the outfield fence varies significantly as well. Overall the park is considered to be one of the most hitter-friendly in the majors.

Fenway Park has undergone significant renovations, since the John Henry ownership began in 2002, including added seats on the Green Monster (left field wall) and on the right field roof. Under the bleachers in right field has become a large concession area. The team has also been able to purchase land adjacent to the park to expand office space and make room for larger locker rooms and player facilities. Another plan is in place to add 1500 or more seats in the next 2 years to increase capacity to over 38,000.

Fenway Park boasts the oldest hand-operated scoreboard in the majors, located in the Green Monster. The scoreboard has been in place since the ballpark opened in 1912. 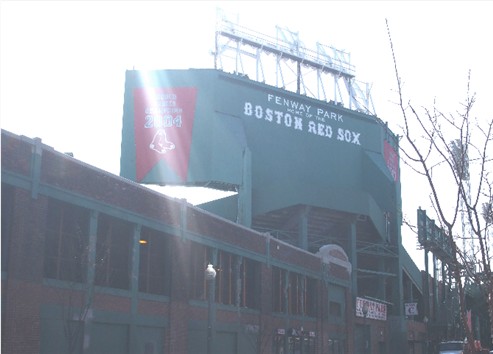 Fenway Park seen from the street. The back of the center field scoreboard is the most visible feature