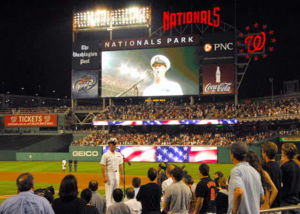 Home of the Washington Nationals, 2008 to present 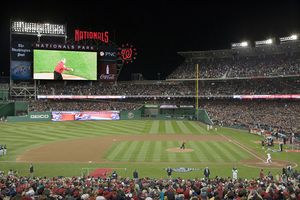 Nationals Park was built in 2007-2008 to serve as the home of the Washington Nationals, who had moved to Washington, DC in 2005 and had played in RFK Stadium for their first three seasons. It took a protracted fight to get the stadium proposal approved by the District of Columbia Council, as a significant amount of public funds was poured into the $600 million facility. The expenditure was justified by proponents by the fact that the ballpark would spur development in a neglected area of the city, in the District's disadvantaged Anacostia neighborhood. It was also argued that the team would attract a large number of fans from the nearby states of Maryland and Virginia who would bring significant tax income to the city by their spending in and around the ballpark.

The ballpark opened for the start of the 2008 season. Attendance was disappointing in the park's first few years, as the team was not competitive, and the ballpark was surrounded by unbuilt areas that did not attract fans. The lack of practical public transportation - the nearest metro stop being over a mile away - did not help either. Things picked up when the team became more exciting following the arrival of young marquee players Stephen Strasburg and Bryce Harper in 2010 and 2012 respectively. The 2012 season also saw the Nationals have the best record in the National League, making the team a hot ticket. The ballpark hosted its first postseason games in the Division Series that year. 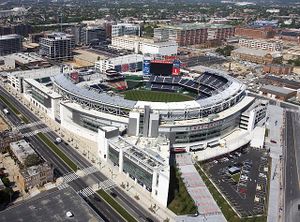 Aerial view of the stadium in 2008

After the 2013 season, the Nats announced that they were seeking an additional $300 million in public funds from the District government in order to put a roof on the stadium. However, if they were hoping to repeat their 2005 hoist, they were in for a rough greeting, as D.C. mayor Vince Gray simply laughed off the request, and one of the mayor's associates was reported as saying the proposed addition to the park "would be cost prohibitive and butt ugly."

On January 1, 2015, the ballpark was transformed into an outdoor hockey rink for one day as it hosted the annual National Hockey League Winter Classic. 42,832 spectators turned out to watch the Washington Capitals defeat the Chicago Black Hawks, defending Stanley Cup champions, 3-2, thanks to a goal by Troy Brouwer with less than 13 seconds to play.

On July 17, 2015, the Nationals' first game after the All-Star break against the Los Angeles Dodgers was suspended because of problems with a bank of lights on the third base side of the field. When the lights first went out in the 4th inning, it caused a delay of one hour and 22 minutes, before play could be resumed for only 9 minutes. The lights went off again, and 40 minutes were needed to get them working, but play resumed for 12 minutes before the problem reoccurred, at which point the game was suspended, to be completed the following afternoon. Some players jokingly blamed pop star Taylor Swift, who had held a couple of sold-out concerts at the ballpark during the All-Star break, also damaging the outfield turf in the process, for the problems; however, OF Bryce Harper owed up to being the true cause, explaining that he had used up all the power in the park when blow-drying his hair.

One of the most famous features at Nationals Park, is the "racing Presidents" who perform between innings. Five sprinters sporting giant papier-mâché heads representing some of the greatest United States presidents engage in a race around the ballpark. It is a "no-holds barred" event more akin to World Wrestling Entertainment than to a track meet, as the Presidents trip one another and use various dirty tricks to get ahead, presidential dignity be damned. The race is also performed at the Nationals' spring training facility in Florida, but it features "minor league" presidents like Calvin Coolidge and Herbert Hoover, and not those whose likeness can be seen carved on the face of Mount Rushmore. The race was featured by Topps on a baseball card in its 2018 set, as part of a subset entitled "Team Traditions & Celebrations".

In 2019, Nationals Park became the first ballpark to disallow backpacks, with a few exceptions. The team explained this because of the ballpark's proximity to the United States Capitol and other buildings of national importance.