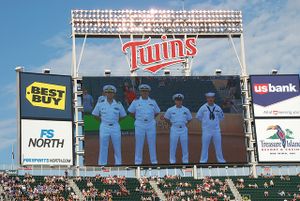 Target Field replaced the Hubert H. Humphrey Metrodome. Prior to the Metrodome, the Twins played at Metropolitan Stadium. Target Field was built in time for Opening Day of 2010. It marked a large change in style from the Twins, as they moved from the quirky indoor Metrodome to the very classical outdoor Traget Field. Everyone had to agree, however, that weather concerns excepted, the aesthetic experience of watching a baseball game was much improved in the new ballpark. In contrast with the Twins' two previous homes, which were located in suburban Bloomington, MN, Target Field was built in downtown Minneapolis, MN. It was one of the first ballpark built with the issue of environmental sustainability in mind, and includes a system for the collection of rainwater, to be used to water the field and clean the grandstands.

The first regular-season game in Target Field took place on April 12, 2010, a 5 - 2 Twins win over the Boston Red Sox. This official opener had been preceded by a college baseball game between the University of Minnesota and Louisiana Tech at the end of March, and a pair of exhibition games with the St. Louis Cardinals a week earlier. Carl Pavano was on the mound for the first pitch, and Jason Kubel hit the first home run. The Red Sox's Mike Cameron had almost beaten him to the punch, but his long drive to left field was called a foul ball after a video review. However, while the Metrodome was very hitter-friendly, Target Field has proved to be more favorable to pitchers over its first few seasons, being below average in both runs scored and home runs hit. The Twins set a home attendance record of 3,223,640 in their first season at Target Field, in spite of its smaller capacity compared to the Metrodome.

While weather concerns did not play a particular role in the Twins' first three seasons at Target Field, they sure did at the start of the 2013 season. By April 22nd, they had already had to postpone three games because of snow and freezing weather - after having only five games thus affected in the first three years the ballpark was in use - and more snow was expected.

A number of statues of past Twins greats have been erected outside Target Field. Those honored include Tony Oliva, Harmon Killebrew, Kirby Puckett, Rod Carew, Calvin Griffith, Carl Pohlad and his wife Eloise, Kent Hrbek and Tom Kelly. They are all broze sculptures designed by local artist Bill Mack.