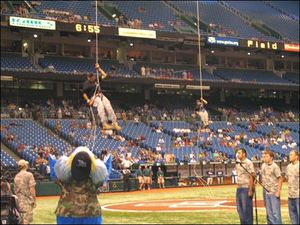 Tropicana Field, located in St. Petersburg, FL, is the home of the Tampa Bay Rays. It was actually built over a decade before the Tampa Bay area was granted a major league team, and for years, the city of St. Petersburg, FL, courted various teams with ballpark issues, urging them to move into the brand new but largely underused grounds, then known as the "Florida Suncoast Dome". The Chicago White Sox and San Francisco Giants both were reported to be close to moving to Florida at some point, but both teams only used the threat of relocation to secure the construction of a new park in their current home in the early 1990s.

Major League Baseball finally moved into Tropicana Field with the creation of the Tampa Bay Devil Rays as part of the expansion of 1998. Ironically, by that time, Tropicana Field was already a relic of a bygone era. A fully enclosed domed stadium with artificial turf, it was a throwback to the 1970s and some of the least-beloved ballparks in recent major league history, such as the Kingdome, the Metrodome and Stade Olympique. Perpetually gloomy and cavernous, it was not a fun place to watch a ball game, and the fact that the Devil Rays were an awful ball team in their first ten seasons did not help. When the team was renamed the "Rays" and suddenly became good in 2008, attendance picked up a little, but never as much as it should have with an exciting young team putting together a string of winning seasons and postseason appearances. It did host games in the 2008 World Series, however, and for once, the climate-controlled environment was a nice contrast to some of the terrible conditions under which that series was played over at Citizens Bank Park in Philadelphia, PA.

Tropicana Field is one of only two major league ballparks to still use artificial turf, the other being Toronto, ON's Rogers Centre. It is also the last fully enclosed ballpark in the major leagues. It is infamous for its steel concourses that hang above the field, below the roof, and regularly interfere with balls hit high in the air. Special ground rules have been designed to cover this situation, but their presence is still resented by most fans. The ballpark's geographic location is also a source of dissatisfaction, as it sits in a cluster of highways far from where most fans live or work. Another sign of how little love there is for the park is that the Rays are the only team never to have hosted the All-Star Game, as Major League Baseball does not wish to see one of its showcase events played in such a dreadful setting.

In addition to the park's unfriendly nature, the Rays are also saddled with a punishing long-term lease, that was designed to prevent others from doing exactly what the city of St. Petersburg had done in the 1980s and early 1990s, i.e. court the team by promising a move into a better ballpark. The Rays repeatedly looked for a solution to move out of Tropicana Field, but were long thwarted by the inability of the various cities in the Tampa Bay area to work together. The city of St. Petersburg did not want the team to move to a downtown Tampa, FL location, while other cities do not want to finance construction of a new ballpark in St. Pete, fearing that this would repeat the bad experience of Tropicana Field. As of 2015, the situation was still at a stalemate, while a number of powerful figures around baseball were beginning to hint that Montreal, QC would be a fine location for a major league team again, if that city put together a solid plan to build a new ballpark. However, St. Petersburg then relented on its stranglehold, giving ownership a window to explore other potential locations in the Tampa Bay area.

To add further to the embarrassment related to Tropicana Field, a report by Sports Illustrated in August of 2017 ranked the facility last in the major leagues in terms of food safety. The catering company at the ballpark had been cited for 241 violations in 2017, including 105 that ranked as critical. During a visit to the stadium on August 23rd that year, Commissioner Rob Manfred expressed MLB's growing frustration with the situation: "I think it's fair to say we want the process to take on a better pace moving forward," he told the media on this occasion. To underline the problem,, the smallest crown to attend a Rays home game since 2006, barely 8,000 fans, showed up that night for a game against the Toronto Blue Jays, and that in spite of the Rays still being very much in the running for a postseason spot. That season, the Rays were averaging 15,815 paying fans per game, a little over half of the major league average of 30,470. On August 29-31, 2017, a series that was supposed to be played in Minute Maid Park between the Houston Astros and Texas Rangers was moved to Tropicana Field because of heavy flooding caused by Hurricane Harvey in Houston, TX. Attendance at the three games was very low, although there were extenuating circumstances, but it got worse a few days later, when the Rays had their lowest-ever attendance for a home game on September 5th, with only 6,509 fans showing up for a game against the Minnesota Twins. Only a few days later, it was the Rays' turn to be displaced by a hurricane, this one Hurricane Irma which forced the move of a three-game series against the New York Yankees from Tropicana Field to Citi Field in Queens, NY from September 11-13.

In February 2018, the Rays announced that they had identified a site in the historic Ybor City neighborhood of Tampa, FL as a location for a ballpark to replace Tropicana Field. There were still a number of issues to resolve, not least that of financing, before construction could begin, however, and by the following December, the project was essentially dead for a lack of financing. Before the 2019 season, the Rays announced some changes to the ballpark, including reducing seating capacity by 5,000 by closing the entire upper deck, bringing total seating to around 26,000, the lowest in the majors by a significant margin. This came after a season during which the average attendance of 14,258 was already second lowest in the majors, ahead of only the Miami Marlins, and that in spite of fielding a 90-win team in 2018. Other changes included building a premium seating area called the "Left Field Ledge", installing a new turf and changing over to LED lights.