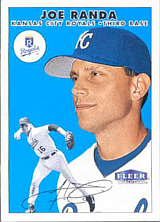 Joe Randa spent over a decade as a starting third baseman in the major leagues. He hit .284/.339/.426 for his career with a reputation as a singles and doubles hitter. A player without great ability, he was able to find openings on several teams that sought a reliable one-year fix at the position. He was known for his positive attitude and was dubbed "The Joker" due to his constant smile.

Randa was a tennis, basketball, baseball and football player in high school. His baseball team won the state title his senior year. The California Angels took him in the 30th round of the 1989 amateur draft but he is not listed as being either in high school or junior college at that point, but is rather listed as Randa, SS, Delafield, WI, much as Puerto Rican players are identified by location instead of school.

Randa broke in with a huge year for the Eugene Emeralds, batting .338/.438/.545. He led the Northwest League in OBP, hits (93) and total bases (150), was second in home runs (11) and RBI (59) and third in average. He made the league All-Star team at third base, was voted the MVP and was named the #2 prospect by Baseball America, after only Troy Percival.

Randa split 1992 between the Appleton Foxes (.301/~.380/.406) and the Baseball City Royals (.275/~.318/.328). Baseball America picked him as the 8th-best prospect in the KC system. Moving up to the Memphis Chicks, Joe hit .295/~.346/.442. He backed up Cris Colon as the AL third baseman in the Double-A All-Star Game. He finished 9th in the Southern League in batting average, led with 13 sacrifice flies, made the All-Star team and was named the #9 prospect in the league by Baseball America, the top prospect on Memphis. They also ranked him the 6th-best prospect in the Royals system.

On December 13, 1996, Joe was dealt with Jeff Martin, Jeff Granger, and Jeff Wallace to the Pittsburgh Pirates for Jay Bell and Jeff King. While his name was not Jeff, he was allowed to be part of the trade because his name did begin with J. Randa hit .302/.366/.451 with the 1997 Pirates as the club with the lowest payroll in baseball was part of the pennant race. His 111 OPS+ would register his best offensive season (he matched the figure two years later). He was third in the 1997 NL with 9 triples. He also hit .364/~.467/.727 in three games with the Calgary Cannons.

Despite having had a successful and popular year, Pittsburgh left him unprotected in the expansion draft and continued to leave him unprotected when they added three players after each of the first two rounds. In the third round of the draft, he was taken by the Arizona Diamondbacks. They turned around and traded him (with Gabe Alvarez and Matt Drews) to the Detroit Tigers for Travis Fryman.

Randa was considered to be one of GM Randy Smith's disappointing pickups in 1998. He hit .254/.323/.367 in his second-worst year as a regular. Unlike Bip Roberts, Pete Incaviglia and others, he was at least able to hold on to a regular job. Joe was traded to the New York Mets that December in exchange for Willie Blair. He spent six days in the Mets organization before being flipped again, going back to Kansas City in a deal for Juan LeBron.

Considering retirement, Joe decided to keep playing when the Pirates brought him back after nine years away. GM Dave Littlefield signed him for $4 million, more than he had made in all but one prior season, despite his age and declining production. Pirates fans wondered why he was signed as Freddy Sanchez had finished the 2005 campaign in excellent form. Joe started slowly then injured his foot in early May. Sanchez stepped in and went on to win the batting title. When Randa was ready to return, he did so as a bench player. Overall, he hit .267/.316/.388 in 89 games for the 2006 Pirates. He retired at year's end.

Randa's son, Jake Randa, was a 13th round pick by the Washington Nationals in the 2019 amateur draft.