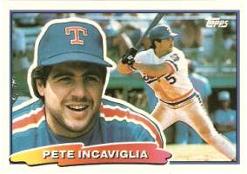 Pete Incaviglia, perhaps the best college player of all time, was a low-average slugger in the majors whose highest home run total was as a rookie.

He was selected in the 10th round of the 1982 amateur draft by the San Francisco Giants but did not sign. He was later drafted by the Montreal Expos in the first round of the 1985 amateur draft, 8th overall, after an incredible college season. In 1985, while playing for Oklahoma State University, Incaviglia hit 48 home runs and drove in 143 runs in just 75 games. He ended his career at Oklahoma State with an NCAA-record 100 home runs. He insisted on going straight to the major leagues, something which the Expos were not prepared to let him do. With negotiations at an impasse in the fall of 1985, he was signed by the Expos then immediately traded to the Texas Rangers for pitching prospect Bob Sebra and back-up infielder Jim Anderson. Major League Baseball changed the rules shortly after this trade, preventing teams from trading players until a full year had elapsed after their being drafted, a rule often referred to as the "Pete Incaviglia rule".

Nonetheless, Incaviglia got his wish and broke in with the Rangers at the start of the 1986 season without playing any minor league games. In fact he was the Rangers' clean-up hitter on Opening Day and went on to hit 30 homers, a Rangers team record at the time and also, it turned out, the highest total of his career. Even though he never matched that number, his career was far from a bust: he hit at least 20 home runs each year for five seasons with the Rangers, before becoming a journeyman his last seven seasons.

For years he was the top home run hitter and RBI man among major league players whose last names start with "I." Raul Ibanez has since passed him in both categories. Hall of Fame historian Lee Allen, who liked to keep track of players whose last names started with unusual letters (and who once wrote an article on the topic), would have been thrilled to see Incaviglia come up.

After his playing career, he was a coach for the Erie SeaWolves in 2004-2006. He was named manager of the newly-created Grand Prairie AirHogs of the American Association in 2008, managing there through 2010. In 2012, he was appointed manager of another new team in the same circuit, the Laredo Lemurs.