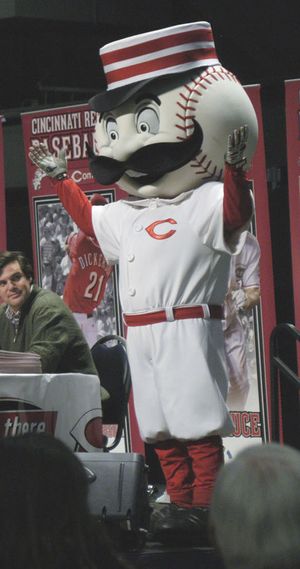 The Cincinnati Reds are a Major League Baseball team located in Cincinnati, OH. The Reds have made nine World Series appearances, and won the World Series five times, in 1919, 1940, 1975, 1976, and most recently, in 1990. The Reds were absent from the playoffs from 1995 to 2010, when they won the NL Central division title.

The Reds have played in the National League since 1890, although they trace their name to the Cincinnati Red Stockings, the first professional baseball team ever assembled, in 1869. The present team was founded in 1882 as a member of the American Association and has no direct relation to the first professional baseball team of the same name. They moved to the National League as a result of the Players League challenge of 1890, which put a rival team in the Queen City, known by its nickname Kelly's Killers; that team moved to the American Association in 1891 and disappeared along with the entire circuit at then end of that season. There was also a Cincinnati Red Stockings team, also sometimes called the Reds, that was a member of the National League from its inaugural season in 1876 until 1880, but that team is also not directly related to the present one. However, with Cincinnati being the home of the founding team of professional baseball, the National League would traditionally play its season opener in Cincinnati until the 2000s, while the American League opened in Washington, DC. If the history of baseball in Cincinnati prior to 1892 is somewhat convoluted, it is not the case since, as there has been a single team from the city which has played every National League season since, with no other major league rivals. Neither the American League nor the short-lived Federal League attempted to place a team in Cincinnati.

Early in the 20th century, the team was referred to in sports articles as "Redlegs" as well as "Reds." From 1954 to 1959, the team officially changed its name to the Cincinnati Redlegs to avoid confusion and possible association with the political "Reds" (Communists), which were especially controversial in the United States at the time.

The Reds have generally not been one of the league's top teams, but have fielded outstanding teams every decade or two: in 1919, they rode an outstanding pitching staff to a surprise National League pennant, then beat the Chicago White Sox in a World Series tainted by the Black Sox Scandal. The Reds reemerged as a power in the late 1930s and won back-to-back pennants in 1939 and 1940, capturing a second World Series title the second year. That team's leaders were pitchers Bucky Walters and Paul Derringer, 1B Frank McCormick and C Ernie Lombardi.

In the late 1950s, the Reds became competitive again with the arrival of young outfielders Frank Robinson and Vada Pinson, who brought them an unexpected return to the World Series in 1961. However, the most famous edition of the team is the Big Red Machine, which dominated the National League in the 1970s under manager Sparky Anderson. That team, built around catcher Johnny Bench, second baseman Joe Morgan, outfielder Pete Rose and first baseman Tony Perez, and a succession of outstanding bullpens, won six division titles in the decade, and won the World Series in 1975 and 1976. After some difficult seasons, the team re-emerged as a power in the mid-1980s when they appointed Rose as their manager and achieved a string of second-place finishes under his leadership, including three seasons when he was the last player-manager in major league history and set the career major league record for hits. However, Rose was shadowed by allegations of gambling, and in 1989, Commissioner A. Bartlett Giamatti banned him permanently from baseball as a result. In 1990, under manager Lou Piniella, the Reds led the NL West from start to finish and surprised everyone by sweeping the heavily-favored Oakland Athletics in the World Series. Shortstop Barry Larkin was the team's best player in those years, and 3B Chris Sabo and P Jose Rijo were key members of the supporting cast, as well as the "Nasty Boys" bullpen of Rob Dibble, Norm Charlton and Randy Myers

After a couple of competitive seasons in the mid-1990s that did not lead to any titles, the Reds had another surge in 2010, led by NL MVP Joey Votto and veteran 3B Scott Rolen, and a solid young starting rotation including Johnny Cueto, Bronson Arroyo, Mike Leake and Travis Wood. But again, they failed to make it very far in the postseason, their most frustrating loss coming in the 2012 Division Series when they took a two-games to none lead against the San Francisco Giants, only to lose the final three games at home, and then watch the Giants win a World Series title. Their star players like Votto, Jay Bruce and Brandon Phillips were able to lead them to the postseason three times in four years in the first half of the 2010s, but they made quick exits each time. That team was eventually broken up and the Reds went back to the doldrums. Only Votto was still around when they made their next postseason appearance, during the pandemic-shortened 2020 season. He had been joined by other sluggers such as Eugenio Suarez, Nicholas Castellanos and Mike Moustakas, the latter two acquired via free agency, to support a strong pitching staff that included Cy Young Award winner Trevor Bauer, and former All-Stars Luis Castillo and Sonny Gray. Their pitching held up in the Wild Card Series against the Atlanta Braves, but they failed to put a single run on the board in the two games, losing Game 1, 1-0, in 13 innings after a brilliant start by Bauer, and Game 2, 5-0, after an implosion by usually reliable closer Raisel Iglesias turned what was a close game until the 8th inning into a blowout.