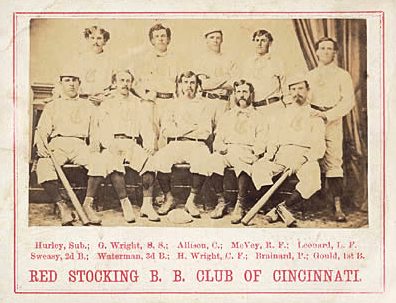 The Cincinnati Red Stockings can refer to at least three different franchises that used that name.

The first was an amateur team founded on July 23, 1866 that was organized to compete against the Cincinnati Buckeyes. Originally called the Resolute Base Ball Club of Cincinnati, the name was soon changed to the Cincinnati Base Ball Club. Though the team wore its distinctive red stockings by this point, it was not until 1868 that the team adopted the Red Stockings moniker and joined the first National Association. In 1869 the team became the first openly all-professional team, and compiled a 89-game winning streak that lasted until June 14, 1870, when they lost in 11-innings to the Brooklyn Atlantics by a score of 8-7. Following the 1870 season, the president of the team, A.P.C. Bonte, announced their would be no team for the 1871 season. During the off-season core members of the Red Stockings moved to Boston and formed the Boston Red Stockings. Today this team is the Atlanta Braves.

The second team played in the National League from 1876 to 1880, when the League revoked its membership, ostensibly for scheduling and playing games on Sundays in violation of the NL charter. Due to chronic financial difficulties the team would drop out and rejoin the league at least twice.

The third team evolved into the current franchise. It operated as an independent team in 1881, then joined the new American Association in 1882. The team jumped to the National League beginning in 1890 and has remained a National League franchise ever since while called by a diminutive of its original name, the "Reds". Ironically, at the height of the Cold War when the Reds name had negative connotations, the Reds chose to lengthen their name again, but chose the name "Redlegs", because by then the city of Boston had re-appropriated the Red Stockings name, under the guise of the Boston Red Sox.