Note: This page is for pitcher and manager Fred Hutchinson; for the infielder in 1925, click here. 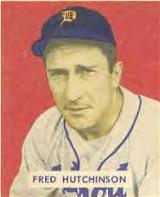 Fred Hutchinson was a major league pitcher and manager. During ten years in the majors as a pitcher (all with the Detroit Tigers), he won 95 games with a high of 18 in 1947. He appeared in the 1940 World Series and was named to the 1951 All-Star Game. As a manager he had a record of approximately .500 in twelve years, most notably leading the surprise 1961 Reds to the pennant.

He twice won 25+ games in the minors. After his graduation from Franklin High School in Seattle, WA, Hutch signed with the Seattle Rainiers of the Pacific Coast League. He set the PCL on fire in 1938: he hit .313 and posted a strong 25-7 record on the mound.

The following year, Hutchinson moved to the major leagues with the Detroit Tigers. He did not fare nearly as well, going just 3-6 in 1939. Hutchinson returned to the minors with the Buffalo Bisons of the International League, posting a 7-3 mark with a 2.49 ERA in 1940. Hutchinson then led the league in wins the next season, going 26-7 with a 2.44 ERA (3rd in the IL); he also led the IL in complete games (31), innings (284) and most hits allowed (241).

After missing 1942 to 1945 to the Navy, Hutch became a solid major league pitcher. He reeled off six consecutive seasons with double-digit wins. He was named an American League All-Star in 1951.

After the 1951 season, Detroit named Hutchinson player-manager, though he significantly decreased his own playing time in 1952 and 1953. He retired as a player for good in 1953. Hutchinson's career marks as a pitcher include a 95-71 record and a 3.71 ERA on the mound. Despite pedestrian expectations of pitchers with the bat, Hutchinson proved a strong hitter, tallying a .263 average with four home runs in limited at bats. In 1954 he was elected to the International League Hall of Fame.

Hutchinson continued to manage, moving onto Seattle in the PCL in both 1955 and 1959, sandwiching his time as skipper of the St. Louis Cardinals from 1956 to 1958. His most succesful reign as a manager came with the Cincinnati Reds from 1959 to 1964. He won the National League pennant in 1961, losing the World Series to a strong New York Yankees squad.

In the winter of 1963, Hutchinson asked his brother, surgeon William B. Hutchinson who also played baseball at University of Washington, about a pain in his neck. It turned out to be a cancerous tumor. Hutchinson announced the sad news at a press conference on January 3, 1964, but vowed to continue as Reds' manager while enduring chemotherapy. The travel wore him out, and he was forced to step down on August 13, 1964 in favor of Dick Sisler. He finished his career as a manager having won 830 games. Fred Hutchinson died of chest cancer at age 45 - he had been a heavy smoker since his days in the Navy - only a few weeks after the end of the 1964 season.

The Hutch Award has been awarded since 1965 to a player who exemplifies the courage and desire of Fred Hutchinson. The first recipient was Mickey Mantle. Bill Hutchinson, who diagnosed his brother's condition, later founded the Fred Hutchinson Cancer Research Center in Seattle in 1975; it has become one of the world's leading research institutions in the field of oncology.

On December 24, 1999, the Seattle Post-Intelligencer named Hutchinson Seattle's athlete of the 20th Century, ahead of Ken Griffey, Jr.