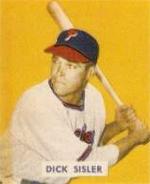 Dick Sisler, the son of Hall of Famer George Sisler, had a respectable baseball career in his own right. He and his father are one of only three pairs of fathers and sons who both were big league managers. The other pairs are Bob Skinner and son Joel Skinner, and Bob Boone and Aaron Boone.

After missing the 1943-1945 seasons due to military service during World War II, Dick broke in with the St. Louis Cardinals in 1946, a team which won the World Series; he appeared in two World Series games as a pinch hitter.

After a less impressive year in 1947, he joined the Philadelphia Phillies who were building toward their pennant-winning "Whiz Kids" year in 1950. 1950 was Sisler's best year, as he hit .296 with 13 home runs and was included on the All-Star team. In the 1950 World Series, he played in all four games, batting either third or fifth in the lineup. After 11 games with the Cincinnati Reds in 1952, he moved back to the Cardinals for most of 1952 and 1953, where he closed out his eight-year career. In 1952 he equaled his personal high of 13 home runs.

His brother Dave Sisler also played in the major leagues for seven years as a pitcher, and his other brother, George Sisler Jr., was involved in minor league baseball for decades. Dick was a coach with the Reds in 1962 while Dave was a pitcher for the team.