"He was poetry in motion, the perfect player." - Frank Frisch

George Harold Sisler (March 24, 1893 - March 26,1973), nicknamed "Gorgeous George," was one of the greatest fielding first basemen of all time. He set hitting records which no one has equalled in the last eighty years. Ty Cobb called him "the nearest thing to a perfect ballplayer." He is widely regarded as having been the greatest player in St. Louis Browns history. 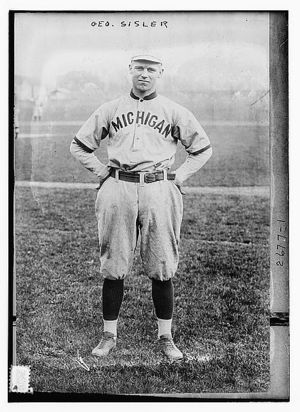 Sisler in his University of Michigan uniform

Born in Manchester, OH which is about 12 miles south of Akron, OH in Summit County and having played college ball for coach Branch Rickey at the University of Michigan, where he earned a degree in mechanical engineering, Sisler came into the major leagues as a pitcher for the St. Louis Browns in 1915. He signed as a free agent after the minor league contract he had signed as a minor four years earlier, and which the Pittsburgh Pirates had purchased, was declared void. The following year he switched to first base; like Babe Ruth, he was too good a hitter to be limited to hitting once every four days. He posted a record of 5-6 with a 2.35 earned run average in 24 career mound appearances, twice defeating Walter Johnson in complete games victories.

In 1920, Sisler not only played every inning of each game, but stole 42 bases (second in the AL), collected 257 hits for a batting average of .407, and ended the season by hitting .442 in August and .448 in September. In breaking Cobb's 1911 record for hits in a single season, Sisler established a mark which stood until Ichiro Suzuki broke the record with 262 hits in 2004, earning his first batting title in the process. However, Suzuki was unable to break Sisler's mark of 257 hits within 154 games which was the length of a complete season during Sisler's era and instead needed the full 162 games to hit safely 262 times in 2004. In the same season Sisler had 257 hits, he was also second in the AL for hitting doubles and triples. He was also second in baseball to Babe Ruth in RBI's and homers that year.

Sisler did even better in 1922, hitting safely in 41 consecutive games - an American League record that stood until Joe DiMaggio broke it with 56 games in 1941. His .420 batting average that year is the third-highest of the 20th Century, surpassed only by Rogers Hornsby's .424 in 1924 and Nap Lajoie's .422 in 1901. He was chosen as the AL's Most Valuable Player that year, the first year an official league award was given. One of the rare first basemen who were also a threat on the basepaths, Sisler stole over 25 bases in every year from 1916 to 1922, peaking with 51 the last year and leading the league three times; he also scored an AL-best 134 runs, and hit 18 triples for the third year in a row.

Sinusitis and Sold to Senators[edit]

In 1923, however, a severe attack of sinusitis caused him to see double, forcing him to miss the entire season. While Sisler continued to hit over .300 after he returned in 1924, he never regained the level of brilliance he had enjoyed before. Even so, he continued to hit over .300 in six of his last seven seasons, and led the AL in stolen bases for a fourth time in 1927. He was the Browns' player-manager in 1924, 1925, and 1926.

In 1928 the St. Louis Browns sold Sisler's contract to the Washington Senators, who in turn sold the contract to the Boston Braves in May, where he became a teammate of Rogers Hornsby. After batting .340, .326 and .309 in his three years in Boston, he ended his major league career with the Braves in 1930, then played in the minor leagues. He accumulated a .340 lifetime batting average over his fifteen years in the majors. He stole 375 bases during his career. He was elected to the Hall of Fame in 1939. Outside of St. Louis' Busch Stadium there is a statue honoring Sisler. He was a coach for the Boston Braves in 1930 and many years later (1959) for the Pittsburgh Pirates.

Sisler's sons, Dick and Dave, were also major league players in the 1950s. Another son, George Jr., served as a minor league executive.

In 1999, he ranked Number 33 on Sporting News' list of the 100 Greatest Baseball Players, and was nominated as a finalist for the Major League Baseball All-Century Team. In 2010, he made the College Baseball Hall of Fame.

Some or all content from this article is licensed under the GNU Free Documentation License. It uses material from the Wikipedia article "George Sisler".