Inducted into Hall of Fame in 1942 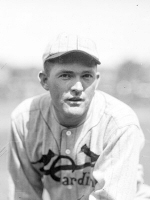 "People ask me what I do in winter when there's no baseball. I'll tell you what I do. I stare out the window and wait for spring." - Rogers Hornsby

Rogers Hornsby was an incredible player who retired while holding the record for the most career home runs in the National League, and he continues to hold the National League record for the highest career batting average. Hornsby's major league career batting average of .358 was more than 100 points higher than his minor league career batting average (once the winning answer to a SABR Trivia contest in 1987). Although he finished the 2005 season 108th on the all time home run list, Hornsby was once second all time to Babe Ruth in home runs. He was also a long-time manager, a couple of whose teams rebelled against him. As manager of the 1926 Cardinals, he brought St. Louis their first World Series victory.

Hornsby, sometimes called "Rajah", was obsessed about baseball, refusing to do anything off-field that might strain his eyes.

While quite proud of his fielding ability as a shortstop in those years, Hornsby nevertheless had mediocre range factors and improved his range when he moved to 2nd base in 1920.

The lively ball era ushered in by Babe Ruth was welcomed by Hornsby, who took advantage of playing in a small park in St. Louis. Not only did his doubles go up, but his home runs shot up as high as 42 and his triples stayed as high as they had been in the dead-ball era. He holds a five-year batting record with a .402 batting average over the span 1921-1925. He also won the 1922 and 1925 National League Triple Crowns. He was MVP in 1925.

Throughout the 1920s, Hornsby missed hitting .360 only once. He won the batting championship 7 times that decade, and was second once and third once. His high was .424 in 1924. Hornsby was the first player to reach 300 home runs in the National League, on May 17, 1924. And he wasn't a one-team player. When traded to the New York Giants in December 1926 at age 31 (for Hall of Famer Frankie Frisch, a younger player), Hornsby responded by finishing second in the league in batting, first in on-base percentage and second in slugging. When he moved to the Boston Braves in 1928, he led the league in batting, on-base percentage and slugging. When he moved to the Chicago Cubs in 1929, at the age of 33, he won the MVP award.

He never played a full season after that, although in 1931 he finished first in OBP and second in slugging while appearing in 100 games. Hornsby had become a player-manager in 1925, and was to gradually play less and less under teams he managed. His last year as a player was 1937, in which he hit .321 in 56 at-bats for the St. Louis Browns. It was also the last year for Jim Bottomley, who had played alongside him on the Cardinals as a young player, and who now finished up with the Browns. He played 2 games in Mexico in 1944 for Veracruz, going 1 for 1 with a double.

As a manager, Hornsby managed 15 years with 6 teams, of which he was player/manager with 5 of them. The 1926 St. Louis Cardinals team won the World Series under his helm.

"I played my best ball for him, but he was mean . . . I played my greatest time for him, but everyone hated him." - Harlond Clift, about Hornsby as the manager of the St. Louis Browns

Ted Williams credited Hornsby as having a big impact on him as a hitter.

Bill James ranks Hornsby as the third greatest second baseman of all time, behind both Joe Morgan and Eddie Collins. He is almost universally ranked as the top offensive second baseman, but some analysts and fans have argued that his poor defense drops him below the likes of Morgan, Collins or Nap Lajoie as the top all-around second baseman.

"Son, when you pitch a strike Mr. Hornsby will let you know." - An umpire, in response to a rookie pitcher's complaint that some of his pitches had incorrectly been called as balls

As opposed to the quote above, Hornsby "peddles life insurance" during winter, per a January 21, 1921 newspaper article, see link title. 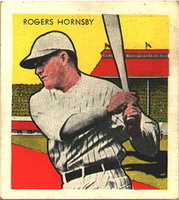