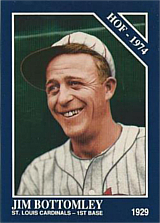 Inducted into Hall of Fame in 1974

“He wore his baseball cap at a jaunty angle and his mannerisms on the playing field made him a Ladies’ Day favorite. But he was equally the favorite of the male fans for his slugging prowess.” - from Jim's New York Times obituary

“I don’t have a regret in the world. If I had to do it all over again, I wouldn’t change a thing. I’ve loved every minute of it.” - Jim Bottomley

Hall of Famer Jim Bottomley played sixteen years in the major leagues, hitting .310. He won the MVP award in 1928, and was a key part of four St. Louis Cardinals World Series teams.

The most similar player, according to similarity scores, is Joe Medwick, also a long-time Cardinals player, who was a rookie during the last season Bottomley spent with the Cardinals. He was known as a good defensive player and his obituary says he was popular on Ladies Day at the ballpark.

Bottomley had heart problems, suffering a heart attack while serving as a minor league manager and eventually dying in St. Louis at age 59 of another heart attack.