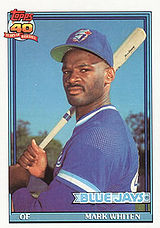 "You can't even do what he did in batting practice." - Todd Zeile, talking about Whiten's incredible day on September 7, 1993

"I've been around the game 16 years. I've seen some guys do unbelievable things, but nothing like tonight." - Ozzie Smith, commenting on the same feat

Mark Whiten was signed by the Toronto Blue Jays and scout Ellis Dungan as a 5th round pick in the January 1986 amateur draft. He played 11 seasons in the major leagues with a slugging percentage of .415.

On September 7, 1993, he famously hit four home runs in one game against the Cincinnati Reds in the second game of a doubleheader at Riverfront Stadium. In that game, he tied Jim Bottomley for the MLB single-game RBI record with 12, but he could have had 13. In the at-bat prior to his second home run, Gerald Perry hit a check-swing ground ball single to third baseman Chris Sabo on which Bernard Gilkey scored from second base. In the first game of that doubleheader, he drove in one run; therefore, he co-holds the record for most RBI in a doubleheader (13) with Nate Colbert.