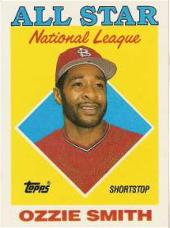 Inducted into Hall of Fame in 2002

When acrobatic shortstop Ozzie Smith came up with the San Diego Padres in 1978, he was a light-hitting defensive whiz. He spent the majority of his career with the St. Louis Cardinals after a trade for Garry Templeton before the 1982 season, and he developed into a respectable hitter. Although he never had much power, Smith delivered when needed; he hit a game-winning homer in Game 5 of the 1985 National League Championship Series. Smith also hit .303 in 1987.

Still, his greatest asset - and the source of his nickname: The Wizard of Oz - was his defense. In recognition of this, he received 13 consecutive Gold Gloves and was named to the Rawlings All-Time Gold Glove Team. He holds numerous records for assists and double plays. The Wizard is considered by some to be the greatest defensive shortstop in the history of the game.

Ozzie would sometimes do a back flip when he came out to take his position in the field.

A whole lot of people expected that Ozzie would win the MVP award in 1987. His team had won the division (and went on to the 1987 World Series), and Ozzie had posted a .303 batting average and a .392 on-base percentage, with 40 doubles, 43 stolen bases and 104 runs scored. And, as usual, his range in the field was wildly above average. However, while the MVP voters gave Ozzie 9 first-place votes, they gave Andre Dawson 11 first-place votes in spite of his team finishing last in the division and in spite of Dawson's stats being helped by playing in Wrigley Field.

Smith was elected to the Baseball Hall of Fame on January 8, 2002 by the Baseball Writers Association of America.

An amateur singer, Smith contributed a rendition of Sam Cooke's "Cupid" in the 2005 album "Oh Say Can You Sing?" His son Nikko was a contestant on the reality show "American Idol" in 2005.

He appeared in The Simpsons episode "Homer at the Bat". Quote: "This is a town rich in tradition. You've got the Clydesdales coming in before World Series games. People are getting off the wagon, like Stan Musial, Marty Marion, and Roger Maris. Maybe some day I can come in riding on that wagon." Ozzie Smith.