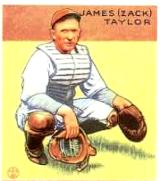 Zack Taylor was a catcher who played 16 years in the major leagues, and also managed the St. Louis Browns for several years. As a player, almost all of his major league career was in the National League. He started with the pennant-winning Brooklyn Robins in 1920, was on the pennant-winning Chicago Cubs in [[1929 Cubs|1929], and finished out his career with Brooklyn again in 1935.