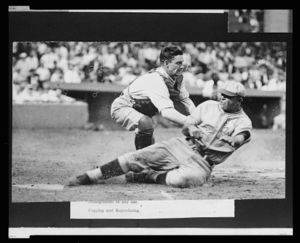 Bing Miller, of the Philadelphia Athletics, tagged out at home plate by Washington Nationals catcher "Muddy" Ruel in 1925

Muddy Ruel was a catcher in the major leagues for 19 years, from 1915 to 1934. After his playing days, he was general manager of the Detroit Tigers, then assistant to the commissioner of baseball, and later manager of the 1947 St. Louis Browns. A scholar with a legal degree from Washington University in St. Louis, Ruel was legal counsel for Commissioner Chandler in 1946. He was admitted to argue cases in front of the Supreme Court.

He was the catcher for the New York Yankees when Carl Mays threw the pitch that killed Ray Chapman.