In the 1924 World Series, the Washington Senators beat the New York Giants in seven games. Though the Senators (interchangeably called the Nationals in those days) would reach the World Series twice more during their time in Washington (1925 and 1933), their next World Series victory would not come until 1987, after more than half a century and a relocation from Washington to become the Minnesota Twins. 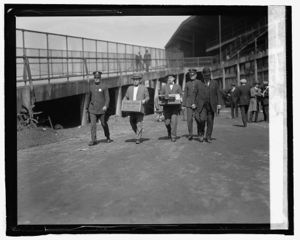 A police escort for the tickets to a game.

The Giants became the first team to play in four consecutive World Series, winning in 1921-1922 and losing in 1923-1924. Their long-time manager, John McGraw, made his ninth and final World Series appearance. 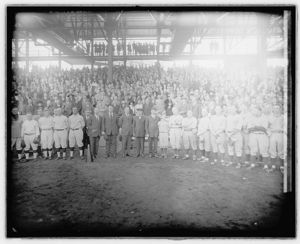 Walter Johnson, after pitching his first 20-victory season (23) since 1919, was making his first World Series appearance, at the age of 36, while nearing the end of his storied career with the Senators. He lost his two starts, but the Nats battled back to force a Game 7, giving Johnson a chance to redeem himself when he came on in relief in that game. Johnson held on to get the win and give Washington its first and only championship. The seventh game is widely considered to be one of the most dramatic games in Series history.

Johnson struck out 12 Giants batters in Game 1 in a losing cause. Although that total matched Ed Walsh's number in the 1906 World Series, it came in 12 innings. Johnson only struck out 9 in the first 9 innings.

In Game 7, with the Senators behind 3-1 in the eighth, Bucky Harris hit a routine ground ball to third which hit a pebble and took a bad hop over Giants third baseman Fred Lindstrom. Two runners scored on the play, tying the score at three. Walter Johnson then came in to pitch the ninth, and held the Giants scoreless into extra innings. With the score still 3-3, Washington came up in the 12th. With one out, and runners on first and second, Earl McNeely hit another grounder at Lindstrom, and again the ball took a bad hop, scoring Muddy Ruel with the Series-winning run.

This was the second extra-inning World Series-deciding game (1912) and the last before 1991. The winning team of the 1991 World Series was the very same franchise, by then known as the Minnesota Twins. 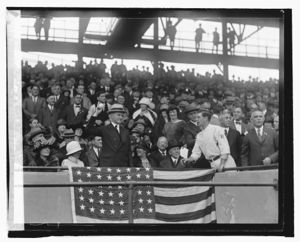 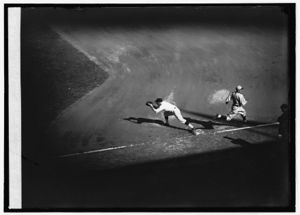 This page is in need of some additional content. Please help the Bullpen by expanding it, or learn how to contribute.
Retrieved from "https://www.baseball-reference.com/bpv/index.php?title=1924_World_Series&oldid=1126278"
Categories: