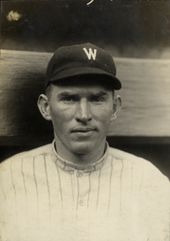 "Following the epoch-making circuit smash, the only unhappy individual within the Stadium was Zachary. He realized he was going down in the records as the historic home-run victim, in other words the goat." - The New York Times

Tom Zachary played nearly two decades in the majors and won 186 games but is perhaps best remembered as the pitcher who allowed Babe Ruth's 60th home run in 1927.

A North Carolina native, Zachary attended Guilford College, where he played baseball, football, and basketball. He began his pro career with Connie Mack's Philadelphia Athletics in 1918, playing under the assumed name of "Zach Walton" to avoid losing his college eligibility. He made 2 starts for the team, giving up 5 earned runs over 8 innings, but managed to record wins in both outings. He then headed to Europe to serve with the Red Cross during World War I. 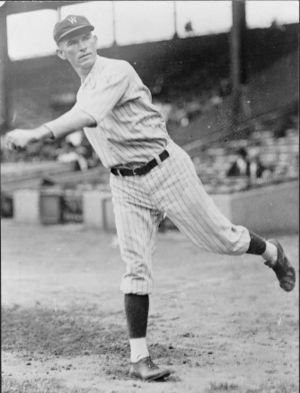 Tom Zachary with the Washington Nationals, 1924/5

After returning to the states, Zachary was signed by Clark Griffith's Washington Senators in 1919. In 17 games that year, he went 1-5 with a 2.92 ERA. He joined the team's rotation the following summer and won 15 games, and he followed that up with a career-best 18 wins in 1921. In 1924, he went 15-9 with a 2.75 ERA as Washington won the American League pennant. In the World Series against the New York Giants, he won both of his starts, and the Senators won the championship in seven games. He started 33 games to lead the AL in 1925, but his record dropped to 12-15. Washington again won the league crown, but he only made one relief appearance in the 1925 World Series, as his club fell to the Pittsburgh Pirates in seven.

Prior to the 1926 season, Zachary was dealt to the St. Louis Browns, but after a season and a half with St. Louis, he was traded back to Washington. On September 30, 1927, in the 8th inning of a game against the New York Yankees, he gave up a home run to Babe Ruth. The two-run, game-winning shot was Ruth's 60th of the season (and the third given up to the Bambino by Zachary that year). Zachary insisted the ball was foul, but umpire Bill Dineen disagreed, and Ruth's record stood until 1961.

Less than a year after allowing the historic home run, in 1928, Zachary was selected off waivers by the Yankees and became one of Ruth's teammates. He appeared in 7 regular season games for New York as the club captured the AL pennant. In the World Series, he started Game 3 and hurled a complete game win as his club swept the St. Louis Cardinals. The following year, 1929, he posted a perfect 12-0 mark to set the major league record for most wins in a season without a loss.

Zachary was acquired by the Boston Braves in 1930 and spent four years with the team. He then moved on to the Brooklyn Dodgers, and he ended his big league career in the same city in which he began it, appearing in 7 games for the Philadelphia Phillies in 1936. He ended his career with a 186-191 record and a 3.73 ERA, along with 186 complete games and 24 shutouts.

Following his baseball career, Zachary returned to his hometown of Graham, North Carolina. He died of a stroke at age 72.