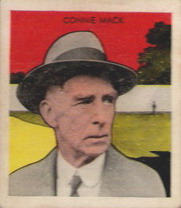 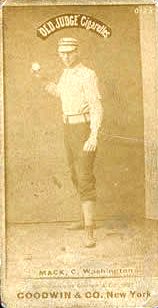 Connie Mack was the longtime owner and manager of the Philadelphia Athletics. As manager, he always wore a suit in the dugout, instead of a uniform.

He got his start managing with the Pirates, and also managed four seasons in the minors with Milwaukee before beginning his Philadelphia managerial career in 1901, the first year that the new American League was a major league. He was also the team's part owner, in combination with his partner Benjamin Shibe. In 1937, he became team President, after the deaths of Ben Shibe in 1922, his son Tom in 1936, and Tom's brother John's illness. The Shibe-MacFarland family retained minority ownership in the team, while Connie Mack allocated some of his shares to his three sons and to his second wife Katherine (his first wife had passed away in 1892). 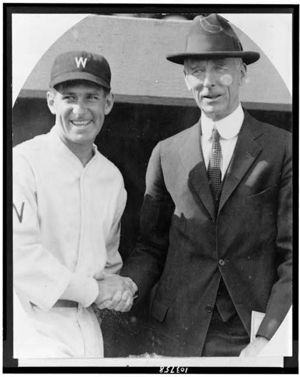 It is clear however that Connie Mack remained a manager for far too long. His teams beginning in the 1940s were always awful (finishing in the first division once in his last 17 years as manager) and he was becoming increasingly senile while nominally the manager as coaches ran the team for him. His declining ability also affected his judgment in the front office. He feuded with his sons, leading to a costly deal to keep majority control of its Board of Directors by mortgaging Shibe Park. Lack of control over the board had already cost him, when Jimmy Dykes was named to succeed him as manager, when he had for years been grooming his son Earle to take over the job. The ballpark deal quickly became crippling for the team's finances and the remaining Macks were forced to sell to outsider Arnold Johnson after the 1954 season. Johnson moved the team to Kansas City. Connie Mack was named as the team's Honorary President and was even present at the team's inaugural game in Kansas City, but never had a say in the team from that point and died a year later.

He was elected to the Baseball Hall of Fame on December 7, 1937 by the Centennial Commission. Even so, he would go on to manage for 13 more years. In a historical footnote, he was the first baseball personality to be interviewed on television. On February 11, 1937, the Philco Company of Philadelphia wanted to display its new television technology, with a horizontal resolution of 441 lines. It invited selected guests to the Philadelphia Cricket Club to witness the broadcast of an interview conducted a few miles away in the company's studios, between two of the city's most famous citizens, Mack and journalist Boake Carter, displaying the huge leap in image quality over previous models. No record was kept of what was said between the two men, as journalists who attended the event were focused on the technological marvel.

His son, Earle Mack, was a major league player, coach, and manager. His second son, Roy Mack, was a senior executive with the Athletics. His third son by a second marriage, Connie Mack Jr., led the charge to have him ousted as the Athletics' President before being bought out in 1950 and moving to Florida; Mack's grandson and great grandson have both served as members of Congress, representing Florida.

"To me, the name of Connie Mack always has been synonymous with baseball, standing for everything that is best for the game he loved." - Will Harridge