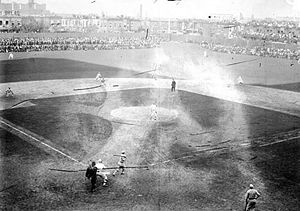 Shibe Park was the first steel and concrete stadium in baseball. It was constructed in 1908. It hosted the Philadelphia A's from 1909 to 1954 and the Philadelphia Phillies from mid-1938 to 1970. The stadium's main entrance was at the corner of 21st Street and Lehigh Avenue. The stadium suffered a fire in 1971 and it was torn down in 1976. Its successor was Veterans Stadium.

Shibe Park was named after Benjamin Shibe, part owner of the A's when the stadium was built. In 1953, it was renamed Connie Mack Stadium in honor of A's manager and owner Connie Mack, who had recently retired. However, by that point, Connie Mack and his two sons by a first marriage, Earle Mack and Roy Mack had put up the stadium as collateral in a deal to buy out Mack's third son by a second mariage, Connie Mack Jr., who was threatening to ally with minority owners to wrest control of the franchise from the family patriarch. The deal proved crippling to the A's finances, and the Macks were soon forced to sell the team to Arnold Johnson after the 1954 season, who moved it to Kansas City. As part of the deal, Johnson wiped out the debt and became owner of the ballpark, which he no longer needed. He turned around and sold it to Phillies owner Robert Carpenter for $1,675,000. The Phillies had until then been paying a minimal amount of rent to use the park, and were saddled with the aging and poorly-located facility for another 15 years before they moved out. 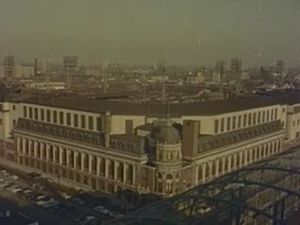