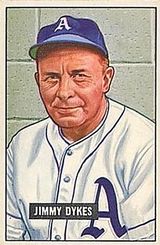 His playing career lasted 22 years - all with two teams: the Philadelphia Athletics from 1918 to 1932, and the Chicago White Sox from 1932 to 1939. He broke in at the age of 21, and was still playing at the age of 42. According to the similarity scores method, the most similar player is B.J. Surhoff. However, his contemporary "Rowdy Richard" Dick Bartell might be a more meaningful similar player.

When Dykes reached the majors with the Athletics in 1918, they were not much of a team, finishing last in the American League. Both he and shortstop Joe Dugan (later to play on the 1927 New York Yankees) were 21 years old and hit under .200, with Dykes getting 186 at-bats. The most prominent player that year was "Tioga" George Burns, who hit .352. The Athletics were to finish last each year for the first several years of Dykes' career.

Dykes became a regular in 1920, hitting over .300 several times, but mostly being under .300. He neither scored nor drove in 100 runs in any season. He was an expert at being hit by the pitch, leading the league several times, and almost always being among the leaders in that category. In 1927, he hit .324 and was 8th in the MVP voting.

The Athletics won the World Series in 1929 and 1931, and also won the AL pennant in 1931. Dykes played alongside such players as Mickey Cochrane, "Bucketfoot" Al Simmons, Jimmie Foxx and Lefty Grove, all of whom were younger than him. He hit .421 in the 1929 World Series.

Connie Mack dismantled the team for monetary reasons in the early 1930s, and Dykes was purchased by the White Sox, where he spent the last 7 years of his playing career. Despite the presence of Luke Appling and Ted Lyons, the Sox did not win the pennant in any of those years. Al Simmons, Dykes' teammate from the Athletics, also spent several of those seasons with the White Sox.

He played all the infield positions, with the bulk of his appearances at third base.

Dykes became manager of the White Sox in 1934, and for the last six years of his playing career, he was a player/manager. He managed 13 years for the Sox, never finishing higher than third. He then managed the Hollywood Stars of the Pacific Coast League, taking over the team towards the end of 1946 and continuing until being replaced during the 1948 season. His overall managerial record with the Stars was 182-215. He then returned to the Athletics as a coach in 1949 and 1950, before taking over as the team's skipper in 1951. His accession to the position was the result of a front office coup, as Connie Mack had wanted his son Earle Mack to succeed him; however, he had waited so long to step down that the club's other stockholders, the heirs to Ben Shibe and his own son Connie Mack Jr., rebelled and voted to appoint Dykes at the helm. He remained the club's skipper through 1953, before spending a year as skipper of the Baltimore Orioles.

Dykes was then a member of the Cincinnati Redlegs' coaching staff from 1955 to 1958, managing the team for the latter part of the 1958 season. After a brief stint as a coach for the Pittsburgh Pirates in 1959, Dykes became manager of the Detroit Tigers later that season. While with Detroit, he was part of one of the more unusual trades in baseball history. He went to the Cleveland Indians in 1960 in a trade for fellow skipper Joe Gordon.

Dykes spent the 1962 season as a member of the Milwaukee Braves staff, and he ended his coaching career with the team his playing career began with, the Athletics, now in Kansas City. He was a coach for the team in 1963 and 1964. All told, he managed for 21 years in the major leagues with a record of 1,406-1,541 and three seasons in the minor leagues with a record of 182-215.