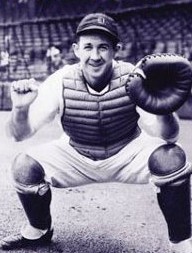 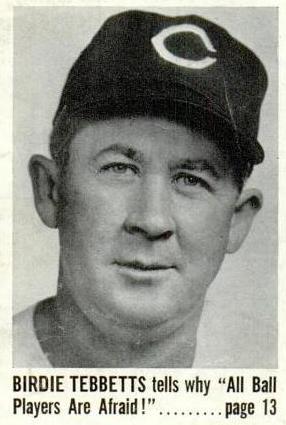 "There ought to be a second-string or Junior Hall of Fame for guys like me. I had a lifetime average of .270 and I'm proud of it. I poured my life's blood into it. I clawed and scrambled and fought and hustled to get it." - Birdie Tebbetts

Birdie Tebbetts played for 14 years in the big leagues and managed for 11 seasons. He entered the Air Force in August 1942 and was discharged in February 1946.

As a player, Tebbetts was a good enough catcher that he never played any other position in the majors. He appeared in the All-Star game four times, and a couple of times was in the top 20 in the MVP voting.

Tebbetts had a reputation for being a plain speaker, once saying that some of his 1950 Boston Red Sox teammates were "moronic malcontents".

Although he played over half of his career with the Detroit Tigers, he never managed them. The one team that he both played for and managed was the Cleveland Indians, for whom he played in 1951 and 1952 at the end of his playing career, and whom he managed from 1963 to 1966 at the end of his managing career. He was the manager in 1956 when Frank Robinson came up as a rookie with the Cincinnati Redlegs. He also managed Hank Aaron and Eddie Mathews in Milwaukee.

He was nicknamed Birdie as a youth by his aunt because of his high-pitched voice. As a kid, his hero was Bill Haeffner, who loaned Birdie a catcher's glove to get him started at the position. Oddly for a ballplayer, Birdie graduated from Providence College with a degree in philosophy. He was there at the same time as Al Blanche. He then did post-graduate work at the University of New Hampshire.