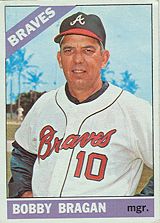 Shortstop/catcher Bobby Bragan played a handful of seasons with the Philadelphia Phillies and Brooklyn Dodgers in the 1940s. He is best remembered for his managerial career.

When he was with the Dodgers, the southerner Bragan was part of a group of players who signed a petition, refusing to play with Jackie Robinson. When asked if he would rather play for Brooklyn or be traded, Bragan asked to be traded. He remained with the Dodgers, though, and became friends with Robinson after getting to know him and witnessing the hatred and racism he faced. Bragan began 1948 season as a player with Brooklyn and ended it as the manager of the Dodgers' minor league squad, the Fort Worth Cats, winning the Texas League championship. Bragan remained with the Cats for five seasons, became very popular in Fort Worth and (aside from his managerial stints) it became his lifetime home.

Bragan went on to manage the Pittsburgh Pirates in 1956 and 1957 and the Cleveland Indians for part of 1958. In 1960, he was a Los Angeles Dodgers coach, and he was a member of the expansion Houston Colt .45s staff in 1962. He took over as skipper of the Milwaukee Braves the following year and remained with the club until the middle of the 1966 season, their first year as the Atlanta Braves. Hank Aaron credited Bragan with encouraging him to steal bases, something that gave Aaron wider recognition as a five-tool player.

Bragan was the only American to manage a Cuban Winter League team to a title, taking the Almendares Scorpions to the pennant in 1953-54. As a manager in the minor leagues, he converted Maury Wills into a switch-hitter to utilize his speed better.

On August 16, 2005, the 87-year-old Bragan managed the minor league Fort Worth Cats of the independent Central League for a game. Bragan was influential in the creation of the "new" Fort Worth Cats club in 2000 (Bragan managed the "original" cats in the 1950s). Eight days older than Connie Mack was when he managed his final game, Bragan became the oldest manager in a professional baseball game.

His younger brother, Jim Bragan, was a major League coach for a number of teams in the 1960s and 1970s. Another younger brother, Peter Bragan Sr. was owner and Chairman of the Board of the AA Jacksonville Suns prior to his death. Another brother, Frank Bragan, was an infielder in the Chicago White Sox chain. A nephew, Peter Bragan, Jr. is President of the Jacksonville Suns. Brother Lionel Bragan scouted for the Reds.