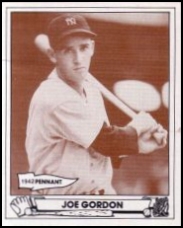 Inducted into Hall of Fame in 2009

Joe Gordon was a star athlete at the University of Oregon, competing in baseball, football, track, and gymnastics. He began his pro baseball career in 1936 with the Oakland Oaks, hitting .300. The next year, with the Newark Bears, he hit .280 with 26 homers and 89 RBIs.

Gordon reached the majors with the New York Yankees in 1938 and went on to win the 1942 American League Most Valuable Player Award. He missed a couple of seasons due to World War II, entering the Army in March 1944 and being discharged in November 1945. After one year back with the Yankees, he was traded to the Cleveland Indians in 1947, where he spent his final four big league seasons.

A nine-time All-Star, Gordon is considered one of the best home run hitters among second basemen in the history of the game. He played on six World Series teams during his career.

He became manager of the Cleveland Indians in 1958 and was part of one of the most unusual trades in baseball history in 1960. While managing the Indians, he was sent to the Detroit Tigers for fellow skipper Jimmie Dykes. Gordon managed the Kansas City Athletics in 1961 and was a scout and minor league batting instructor for the California Angels from 1962 to 1968.

He managed the Idaho Falls Angels for a brief interim in 1966. He then managed the Kansas City Royals in their inaugural season in 1969 as well.