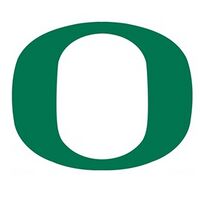 Baseball was the University of Oregon’s oldest athletic program, the first competitive game having been played in 1877. A varsity team was established on a permanent basis in 1905, and competed until the program was dropped in 1981. The announcement that baseball was being discontinued at the university, along with men's gymnastics, women's golf and women's soccer was made by University President Paul Olum on May 7, 1981. The stated reason for the decision was budget reductions.

Even though the school did not sponsor baseball from 1981-2009, that did not stop a player from being drafted out of Oregon - their football team's quarterback Dennis Dixon, was chosen in the 5th round in 2007, and spent a season in the minors.

The school has reinstated baseball as a varsity sport beginning for the 2009 season. On September 1, 2007 the school announced the hiring of George Horton, formerly coach at California State University, Fullerton, as Head Coach for the new baseball team. 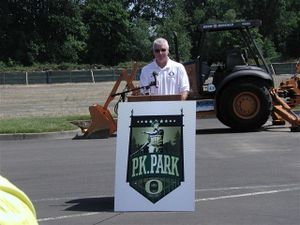 On Friday, August 15th, 2008 at 1:30 p.m., donors, former UO baseball players, university officials, members of the community and Hall of Famer, Bobby Doerr, gathered on the parking lot adjacent to Autzen Stadium to break ground on P.K. Park, the future home of the UO Ducks baseball team. University President Dave Frohnmayer, Athletic Director Pat Kilkenny (after whom the new stadium is named), and Joe Giansante, Senior Associate Athletic Director, all spoke before Pat mounted a backhoe to dip the shovel into a pile of dirt fashioned into a pitcher's mound. Baseball head coach, George Horton threw a ceremonial pitch to the UO mascot stationed behind a home plate painted onto the asphalt in Oregon colors. According to an article in The Register-Guard, [1] the first phase of P.K. Park will be ready for the 2009 season when the Ducks will open against the NCAA champion Fresno State University on February 27. The paper also reported that, "The permanent stadium is expected to seat around 4,000 and will resemble stadiums built at LSU and Penn State by DLR Group - which is serving as the architect of the second phase." Upon completion prior to the 2010 season, P.K. Park is expected to cost between $15-18 million.