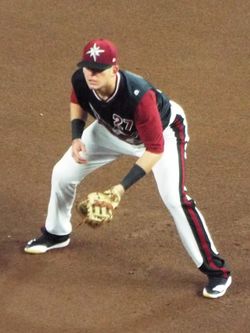 Third baseman Ryon Healy made his major league debut with the Oakland Athletics on July 15, 2016 just days after being the starting DH for the United States team in the 2016 Futures Game. The A's had taken him in the 3rd round of the 2013 amateur draft. He went 0 for 4 against the Toronto Blue Jays in his debut, but the next day he collected his first two big league hits in a 5-4 win, including a 2nd-inning three-run homer off knuckleballer R.A. Dickey. He was named the American League Rookie of the Month for September when he hit .355, scored 19 runs, hit 9 doubles and 7 homers, and drove in 19 runs. He hit .305 in 72 games for the year, with 20 doubles and 13 homers, good for an OPS+ of 134.

After playing exclusively at third base in his rookie season, Healy alternated between three different positions at the start of 2017 - third base, first base and designated hitter. He had the first two multi-homer games of his career in a span of three days in June. the first came on June 3rd when he went deep of Joe Ross and Jacob Turner of the Washington Nationals in a 4-for-4 day, leading the A's to a 10-4 win. Then, on June 5th, he victimized J.A. Happ twice while driving in all 5 of his team's runs in a 5-3 win over the Blue Jays. he played 149 games in all, hitting .271 with 25 homers and 78 RBIs. He was largely a DH in the second half, as two other young players, Matt Chapman and Matt Olson became regulars at third and first base respectively. This turned Ryon into a potential trading chip, and on November 15th, he was sent to the Seattle Mariners in return for P Emilio Pagan and minor league SS Alexander Campos. The Mariners stated that they were looking at Healy as their everyday first baseman in 2018. He was unimpressive in Seattle, however, slashing just .236/.280/423 in two seasons there. He did hit 24 home runs in 2018, but spent most of 2019 on the injured list, and his defense at first base was merely league-average.

He was allowed to leave as a free agent, and signed with the Milwaukee Brewers, but only played four games for the Brew Crew in the pandemic-shortened 2020, spending most of the season at the alternate training site. He moved over to the KBO for the 2021 season, playing first base for the Hanwha Eagles.